"And so the hero married. And for one day at least, the troubles of a hard world were put aside"

"Within every lifetime there are moments of greatness, even perfection, some solitary, but others shared. On a sunny morning, under a clear sky, the villagers crowded together to witness two people stand and declare their love for each other. Some say they were a strange couple, others that they saw a story of true love... Only time would tell."

Marriage is a game-play element that is available in the Fable game series. 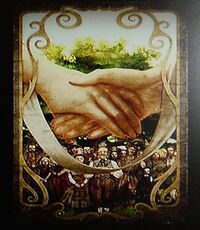 The Hero of each game can get married to most of the minor NPCs they see in the games, as well as some awarded from quests (such as Elise/Eliot in Fable III or Lady Grey in Fable), who have unique character models. The Hero will be required to set them to a marital home (all games) and arrange a marriage (Fable III only) after proposing, which can be any purchasable home commonly found in towns. If they are set in towns, the Hero's spouse will not leave that region unless divorced or moved.

Showing affection and keeping the daily allowance (Fable II and Fable III) for that family at a reasonable level will stop them from having negative feelings about you. Your spouse may also divorce you if he or she is unhappy enough. Making negative expressions at their spouse and keeping them in poverty are ways to make him or her unhappy.

Marriage in Fable, Fable: The Lost Chapters and Fable Anniversary offers limited benefits such as allowing sex, a dowry of gold and receiving the occasional gift from your spouse.

To successfully marry someone, you first have to raise their disposition towards yourself. The higher the disposition, the bigger is the heart above the head of the NPC. You can do this by using expressions (e.g. Flirt) and gifting items. More expensive items have a greater effect, but take care not to always gift the same item. At some point the heart will reach its biggest size and have a dark-red colour. That's the point where the hero can make a proposal by gifting a (real) Wedding Ring which'll turn the heart into a golden one. If you posess a marital home in the same town (which you are using for yourself), the NPC will now give the hero the option to marry him, resulting in a short narrative scene and a dowry of gold if you accept. Note that the hero can have multiple spouses, one for each marital home you own. Therefore the hero can have up to 5 spouses at a time.

For breaking up you can either kill the spouse or force the spouse to divorce by making him/her unhappy (e.g. by punching).

In Fable II, marriage has many more benefits such as improving Sleeping Bonuses, allowing children, and the original benefits from the first game. It also allows the Hero to contract sexually transmitted diseases, though this isn't limited to marriage.

In order to marry in Fable II you must first look at their villager information to see if they are interested in your gender. After establishing that they are, you must use expressions to progress their opinion bar towards Love. Look at their details to see what expression they like to see, receive as gifts, and what is their favourite location. If you perform the liked actions within the liked area, the opinion bar will increase the fastest. When the bar passes the wedding ring icon - and as long as they have a heart above their heads - you can give them a ring to propose. If you use the down D-pad button to give a wedding ring, the game will use the highest valued ring in your inventory. You may circumvent this by using the 'Gift' expression and choosing a lower level ring. The higher the class of your prospective spouse, the better the quality of the ring they will accept. Once a prospective spouse has accepted your gift of a wedding ring, they will follow you until you either; select a Marital Home, dismiss them, or cause them to stop following you. If you still want to marry them, you will need to use the 'Follow Me' or 'Come Up to My Place' expression to get them to follow you again. When you interact with a property sign, after the proposal, you are then prompted to "Set as Marital Home" for your spouse and for your possible future children to live in. The marriage cut scene will then play and your spouse will stay close to that home.

Unfortunately marriages don't always turn out the way that they were supposed to be (even for a Hero) and sometimes this could mean divorce. If your spouse is unhappy with you then they will confront you and inform you that they want a divorce. This occurs when you have neglected your family and can be brought about by decreasing the amount of your spouse's daily allowance and performing evil, rude, or scary expressions until they no longer wish to remain married to you. Alternatively, if still functioning, you may use the services provided by the Temple of Shadows.

After the divorce your wife leaves the game and your children, if any, are taken by the Child Protection Agency and are also removed from the game. Your marital home will also be sold and you will receive 50% of its value.

The biggest change in Fable III is the ability to marry a co-op partner, you and your new spouse will have joint access to your gold. The monetary system is bisected so each player or partner receives half of whatever material or money is involved: e.g., if both co-op players are enthroned regents, if either party were to donate to the treasury one million gold, what occurs is each marital partner then perforce donates only 500,000 each, discretely.

To get married in Fable III you will have to propose and select a house you own from your map. A new system is introduced where, depending on the location, you can select what type of wedding you want.

As outlined below relating to Mourningwood, there is aestheticism and surprisingly other elements involved here too for the player(s). For example when marrying in Millfields, you can choose from a muddy wedding for 100 gold, a monument wedding for 1000 gold or a lake wedding for 5000 gold. If you marry a co-op fellow Hero after the narrative terminates, one can enjoy an expensive, lavish variety of weddings in the Bowerstone Castle environment; technically, it is possible to marry in the castle even during the narrative needing not a co-op wedlock, but rarely done because governed by convoluted preconditions.

To balance the "optimistic" picture here and from the other side, the matter of a marriage ceremony is not always a straightforward affair in Fable III: a marriage event costing one piece of gold - a shadowy hint as to the morbidity of the villainy to come - in the primitive swamplands of Hobbes-infested Mourningwood is a cynical, dastardly means of disposing of one's intended spouse, or, rather, victim, for whatever reason - augmentation related, etc.- as immediately after the very short ceremony, you and your new "spouse" are swarmed en masse lightning-fast by heavy-infantry type Hobbes, and even naive, unsuspecting skilled players shall encounter a certain difficulty in preserving the life of one's partner - one cognizes a certain antisocial cynicism to the game design here.

There is always an environmentally determined, individualized cinematic of the ceremony. If one were to have children, you can look after them yourself or employ a nanny. If you get divorced in co-op the host world keeps the children. This can all be seen here. If one marries for "antinomian" purposes (augmentation-related or otherwise) and there is a deliberate "accident" where the partner is attacked by foreign enemies and succumbs unprotected, the marriage is self-negated and all children, biological or adopted, in this scenario are sent mandatorily to the orphanage.