Lychfield Graveyard is an ancient, sprawling cemetery in Fable, Fable: The Lost Chapters, and Fable Anniversary. It serves as the final resting place for many of Albion's dead. The events of The Graveyard Path quest happen almost entirely on this map.

The Graveyard also has a Demon Door outside its gates. This Demon Door only opens if Nostro, the creator of the Guild and the 'Keeper of the Door', orders it to.

The Lychfield Graveyard is overrun by an almost infinite amount of annoyingly persistent undead, which is useful if you are trying to level up your hero. It is accessable from Headsman's Hill, and then you can teleport when you reach there.

The haunting resting place of generations. 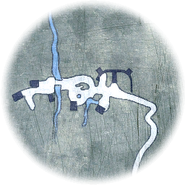