Start a Wiki
Lucien Fairfax, formally known as Lord Lucien, is the main antagonist of Fable II. He was the Mayor of Bowerstone, later he was the architect of the Tattered Spire's reconstruction.

According to books found in Fable II, Lucien was a member of the wealthy and much-beloved Fairfax family, but with a long history of mental instability. Lucien's grandmother Lady Ingrid Fairfax was supposedly insane and kept in the attic by her family. The Fairfax family denied this of course, saying she died giving birth to Lucien's father. Lucien witnessed the death of his sister Ellie at a very young age and left him with a sense of powerlessness.

The story of Fable II starts out with the recent death of Lucien's wife, Lady Helena Fairfax, and his daughter, Amelia Fairfax, from an unknown illness, which drove Lucien into a deep depression. After a while he began researching an Old Kingdom artifact of great power known as the Tattered Spire, which was built by the Archon as a focal point for all Will in Albion, which would grant the user any wish he wanted. After the Archon's initial use of the Spire though, it and the Old Kingdom were utterly destroyed.

Still deep in his depression, Lucien saw this as a way to regain his beloved family, and set out to do whatever was necessary to rebuild the Spire and make his wish. As time went on, however, Lucien's mental state continued to deteriorate and he began to see Albion as a flawed land. In his warped state of mind he saw any world that would take his family away from him not worthy of continued existence. These thoughts eventually caused his plans to switch from resurrecting his family, to becoming a god remaking the world into a perfect one, where no one would ever die. With the help of Garth, a powerful Will-user and Old Kingdom scholar, who was unaware of Lucien's madness, he learned more of Old Kingdom engineering. He, Garth and Lucien's men searched the seas around Albion, eventually finding the destroyed foundations of the Spire. Committed to rebuilding it, he enlisted hundreds of men to ensure it would be completed within his lifetime. As his madness grew, however, he pushed the builders to great lengths and put down uprisings with ruthless force. Finding it too expensive to pay builders and guards, he has innocent villagers kidnapped and used as slaves, with the guards enlisted to ensure obedience. In his madness, Lucien legitimately believed he was working for the greater good, but with every soldier killed, and every slave that fell off the Spire, he became more and more numb to the wellbeing of the very people he was trying to save. As the Spire grew, Lucien used its energy to become a powerful Will user, gifted with the power of foresight, showing him visions of a hooded blind woman (Theresa) and figures standing behind her. At the time he did not understand the visions. He also began searching for better sources for guard recruitment, while experimenting with ways of ensuring obedience in the guards as well. With Garth's help, Lucien also discovered that in order to use the Spire's power, he needed three people who were the embodiment of the Hero disciplines of old, Strength, Skill and Will.

He soon discovered that some of the heroes he was searching for might be right under his nose in Bowerstone. Two young street dwelling children, Rose and her sibling Sparrow, had the blood of a powerful hero in their veins and, as a result, managed to use an Old Kingdom artifact. When Lucien learned of this, he sent guards to collect them and bring them to him. When the children arrived, Lucien instructed them to stand within a circle with an ornate pattern on it. This pattern is the same pattern seen on the seal given to you by Theresa, on the back of the fate cards, and on the Guild Seals in the original Fable. Whether Lucien learned of this symbol from Theresa or co-opted a relic of the destroyed Heroes' Guild for his own purposes is unknown. When the children stepped onto the seal, it began glowing in a bright blue light, but soon turned red. Lucien saw this and was immediately worried. He looked through his books and notes and saw that the children weren't one of the three heroes, one of them was the fourth hero, the hero who had the combined powers of Strength, Skill, and Will, and the hero destined to stop him. In a panic, Lucien shot Rose, who collapsed and perished on the floor. He then turned the gun on little Sparrow and fired. The shot propelled Sparrow out the window and onto the streets below.

Believing his biggest obstacle to be out of the way, Lucien left Castle Fairfax for good and sailed to the Spire, where he would remain for the next twenty years. For the next ten years, Lucien's plans went forward without any resistance, while in Bowerstone his crimes were brought to light and he was considered a tyrant. He used his powers over the Will to create collars that would act to deter his Spire guards against defiance and set up an effective recruitment center in Westcliff for Crucible contenders, who were perfect minions due to their physical strength, mental weakness and lack of ambition. He also embarked on his most abhorrent of experiments: to unnaturally empower his followers with Will by implanting tiny shards from the Spire itself into their bodies. During this time, unbeknownst to Garth, Lucien had discovered that Garth was the Hero of Will, one of the persons he needed to activate the Spire's power. At the same time, Garth became aware of Lucien's diminished mental state and what he had planned to do with the Spire. He escaped from him and went into hiding. Although upset at this news, Lucien at least knew who the Hero of Will was, and intended to find him eventually, but he went with his search of the other two heroes. His experiments of Will empowerment became more effective and produced the Commandant, one of Lucien's most powerful and loyal subjects, who was given command of a Shard, a floating piece of the Spire used as a troop transport and weapons platform.

Eventually he found the Hero of Strength and attempted to have his men arrest her, only for his men to fail, mostly due to a lack of planning, arrogance and foolishness on their behalf. His Commandant finally captured Garth and he was held prisoner in the Spire, but the Hero, who Lucien thought he had done away with, was alive and well and infiltrated the Spire, intent on rescuing Garth. The hero was given a job as a Spire Guard and spent 10 years trying to rescue Garth, which they were finally able to. As they did so, they killed the Commandant.

Lucien was obviously very angry at this development, but bided his time, knowing that the hero was working towards the same goal as he, trying to gather the other heroes. When the pirate Reaver contacted Lucien and claimed the Hero of Bowerstone had come to meet him, Lucien correctly guessed Reaver was the Hero of Skill and sent vast armies to Bloodstone, via an armada of Great Shards, to capture him as well as kill the Hero. The two managed to escape, so Lucien waited until the moment they were all together, atop the hill in Bower Lake. Once the four were gathered, he ambushed them. Suspiciously, Theresa disappears moments before Lucien attacks and Lucien does not seem preoccupied with her absence. His men take the other heroes to the Spire and, if the Hero has a family, he admits to personally murdering them. He then aims his pistol at the hero, and fires; but the Hero's dog leaps in front of the hero, taking the shot for them and dying in the process. Then, yet again, Lucien turns the gun on the hero, intent on finishing what he failed to do so many years ago. Before he fired the second time, he appeared sympathetic, telling the hero how hard it was to shoot them and their sister so long ago, saying "You were only a child... but then - so was I.", and with that, shot and seemingly killed the hero. Lucien then returned to the Spire to make his wish.

Lucien was in for a rather unwelcome surprise, however. During the ritual of channeling the heroes powers of Strength, Skill and Will into the Spire, the fourth hero showed up yet again, and with the power of another Old Kingdom artifact - the Music Box that the hero had purchased with Rose as a child - stopped the ritual. Lucien tried to reason with the hero, trying to convince them that he wanted the best for Albion, but before he could engage the hero in some sort of battle he was shot off the platform and fell to his doom (by either the Hero or Reaver, depending on whether you waited to listen to all he had to say); he can be also finished with a weapon of your choice, such as a hammer or a sword, or even a spell. Though if you wait too long then Reaver will shoot him instead, denying the hero of their revenge that they had been fighting for their entire life. Then mockingly asks "Oh I’m sorry, did you want to kill him?"

Lucien Fairfax appears as a playable character in the XBL Arcade game, Fable Heroes. He can be unlocked by Hero King on the Hero Tile of the Abilities Board.

Lucien's weapon of choice in Fable Heroes is a sword, despite the fact that the only weapon he was seen wielding in Fable II was a pistol. 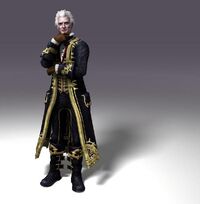