The Lost Bay is a region of the Northern Wastes in Fable: The Lost Chapters and Fable Anniversary. The Oracle reveals that once, during the days of the Old Kingdom, this "Lost Bay" served as the furthest port in the entire Kingdom.

It is here that the Hero arrives in the Northern Wastes after the long voyage from Hook Coast on the Ship of the Drowned.

This port to the Northern Wastes has long been in disuse. The village of Snowspire beyond it has not seen foreign travellers for centuries. 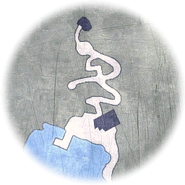 The Ice Troll in the Lost Bay