Lookout Point is the first region you come across after leaving the Heroes' Guild in Fable, Fable: The Lost Chapters, and Fable Anniversary. It acts as a hub area that connects to Bowerstone, the Heroes' Guild, the Picnic Area and Greatwood. Just as the peaceful atmosphere and soothing music would have you believe, the area is considered the safest place in all of Albion, due to a limited amount of quests being used for this area and no hostile enemies ever spawning here. A title vendor can be found here along with two guards, guarding the entrance to Bowerstone. The Boasting Platform is located next to the entrance to the Heroes' Guild. Several villagers may gather around when a Hero boasts about their quests. It is also a good place for showing off Trophies to earn renown or finding followers to take with you on adventures.

When you reach this area for the first time, you will have a choice of helping the beggar or the bully who are arguing next to the statue. To help the beggar, fart in front of the bully and then he will run off. If you help the bully, you need to belch in the face of the beggar. Whomever you pick on will run away, and you will get good or evil points. You may also beat either of them up to make them run away. You may also get into a belching contest with the bully to drive him away.

A popular and peaceful spot. 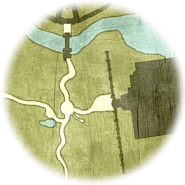