The Fable Wiki
Register
Don't have an account?
Sign In
Advertisement
in: Featured Articles, Spoilers, Albion Military,
and 3 more
English

"This is my Albion; and I will see it destroyed before I surrender it."

King Logan is the central antagonist-turned-possible supporting character in the first half of Fable III. He is the tyrannical ruler of the Kingdom of Albion after the death of his parent, the Hero of Bower Lake, and is the older sibling of the Hero of Brightwall. [1]

As the eldest child of the Hero of Bower Lake, Logan ascends to the monarchy shortly after their death, appointing Walter as his royal adviser. Once in power, Logan continued to power Albion's Industrial Revolution, but was nevertheless still seen as a just ruler in the early years of his rule. He is later seen as a tyrant due to his treatment of the kingdom and its people as he attempts to raise an army, and is seen to "value industry over human suffering".

For most of his rule, Logan continued to fuel the industrial revolution as a just ruler as his parents did before him; however, four years before the start of Fable III, he travelled to the continent of Aurora and ended up passing through Shadelight, where he came in contact with the Crawler and his minions. In the ensuing battle, all of his men were quickly slain, and he would have been killed too were it not for Kalin, the new leader of the City of Aurora. As thanks, he promised the Aurorans that he would protect them from the Darkness, which had readily destroyed most civilization on Aurora. Upon his return home, the blind seer Theresa appeared and told him that the Darkness would come for Albion in five years time, destroying every vestige of life with no regard to pity or mercy. This revelation, combined with his own personal experience of the Darkness and the Crawler, resulted in him devoting everything to the creation of an army to defend his country from the forthcoming invasion.

In his efforts to save the land he loved, Logan became a hated tyrant all across Albion and was largely responsible for the unprecedented suffering that befell its people. He increased the tax, effectively shut down schooling and education, and forced the people to work long hours in the factories. When even this was not enough, Logan turned the running of the country's industry and economy over to Reaver, who effectively cut wages by one hundred percent and introduced both slavery and child labour. He also set about replacing the Royal Army with his fanatical Elite Soldiers, sending those who protest to posts where they are likely to die. This was the fate of the Swift Brigade.

During the opening scenes of Fable III, a factory worker was executed, causing a mob of angry citizens to protest outside of Bowerstone Castle, and when approached on the issue, Logan orders the mob to be killed. However, when Walter confronts him about it in the War Room, he is struck down by one of Logan's guards. The Hero steps in alongside their childhood friend, and after talking for a couple of minutes, they go to the Throne Room where Logan gives the player the power to decide what happens next. Logan, feeling betrayed by his own blood, makes his sibling choose between the lives of their friend (Elise or Elliot) or the lives of the riot leaders. Whichever the player does, Logan will abide by it; if the player chooses neither, Logan will execute both the friend and the riot leaders. When the Hero remarks "I will never forgive you for this," after the choice is made, Logan replies "Good, then you will never forget it," showing how heartless he can be even towards his own family. Whatever the decision made, the Hero, having witnessed Logan's tyranny first-hand, decides to leave the castle with Walter to lead a revolution for the crown.

When the Hero of Brightwall and Walter storm the War Room at the end of the revolutionary war, Logan surrenders without a fight but not before having a quick exchange of words with his little sibling and Walter. Soon after that, Logan is put on trial and explains why he acted as he did. If the Hero decides to spare Logan, he admits that he is glad to be rid of the throne, and you meet him once more at Walter's memorial where he admits you did what he couldn't – you saved the kingdom. Whether you raised the money for your army or not, he is impressed that the kingdom still stands. Logan subsequently leaves Albion to parts unknown to make amends for his transgressions, knowing that its safety is in good hands. 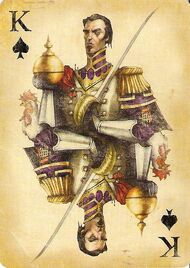 Despite being a tyrannical ruler who is generally cold and suspicious towards most people, Logan seems to genuinely care for his younger sibling. The act of making the Hero choose between the group of demonstration leaders and Elise/Elliot was an attempt to show the Hero what difficult choices a king must make, and through that, make the Hero understand his reasoning in order to gain their respect for what Logan is doing. This is shown when, after the Hero has responded to the ultimatum and states that they will never forgive Logan, he replies "Good. Then you will never forget it". Furthermore, when the Hero and Walter corner Logan in the castle during the revolution, Logan draws his sword as they come in, but then sheaths it and surrenders once he sees his sibling. He also mentions that "My brother/sister deserves to know the truth", and that "You have finally become the man/woman I always wished you to be". After Logan is dethroned, if he is spared, he is thankful and even proud of the Hero for taking the throne.

Once he assumed the throne of Albion, Logan took Walter Beck, the Hero of Bowerstone's close friend, as his royal adviser. However, it is made clear that, despite whatever cordial relationship the two may have once had, Logan has no intent of letting Walter sway his methods or his way of thinking, ordering his Royal Guard to beat Walter when he begs Logan not to fire upon the protesters. Despite this, Logan, if spared, still attends Walter's funeral, perhaps indicating that he still thought well of his parent's friend.

"Good. Then you will never forget it."

— Logan to the Hero of Brightwall, after the ultimatum succeeded, during the quest, Life in the Castle.

— Logan to Walter before ordering the execution of protesters

"I am giving you power over life and death."

"If you can't choose, I will. They will all be executed. So tell me, what are you willing to sacrifice to do the right thing?"

— Logan's soliloquy, in the War Room 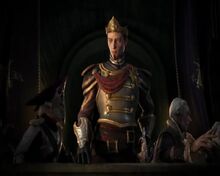 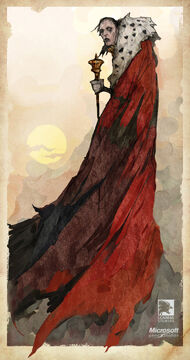 Logan and his guards

Logan on his throne 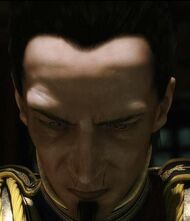 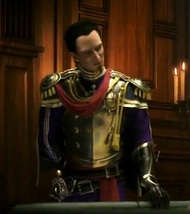 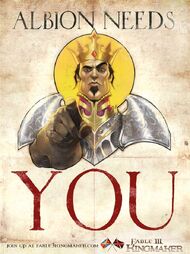 Propaganda poster for the recruitment of Logan's army, with artwork of the King. 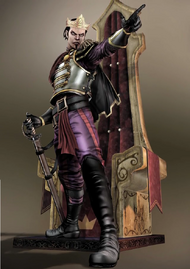 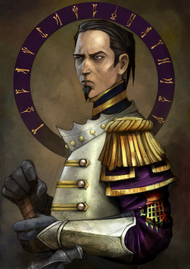