Krakens are large, serpentine creatures that live in the waters surrounding Albion. One of them appears as a boss creature in Fable, Fable: The Lost Chapters, and Fable Anniversary which you have to fight when rescuing Scarlet Robe from Bargate Prison. You get a Kraken Tooth trophy after defeating it.

Although rarely seen, information on these mysterious aquatic leviathans can be gleaned from the Creatures of Albion Book III and the knowledge of the Snowspire Oracle.

Created after the event that the Oracle terms the "War of the Gods", Krakens were among the first creatures to inhabit the world, coming to live in the nine seas that surround Albion. As Trolls lived on land and as Dragons ruled the skies, Krakens came to rule the oceans. Unlike their brethren, however, Krakens did not suffer nearly as much from the rise of Humanity and the creation of the Old Kingdom, content with lurking in the deep oceans and occasionally preying on ships, earning a deserved reputation among the people of Albion for their ferocity in combat. According to the Snowspire Oracle, no Hero could boast of killing a Kraken before the rise of the Hero of Oakvale.

Even as the passing of the ages has proved detrimental to other Albion creatures that gradually found themselves hunted, Krakens have always remained an elusive apex predator. Reaver recalls in his diary that a Kraken attacked his ship, indicating that the beasts survived well into the Age of Enlightenment.

Krakens do not limit their attacks to the seas of Albion – Fable: The Balverine Order describes a Kraken attack on Rackam's ship, proving the creatures still thrive even during the opening days of the Age of Industry.

The Kraken appears at the end of the quest Rescue Scarlet Robe, when the Hero of Oakvale and Scarlet Robe pass back through the Underground Chamber after escaping from Bargate Prison. The first part of the battle consists of the Kraken hiding in the pool of water, using its tentacles to attack. It will attempt to smack you with its tentacles but the only thing you need to do is roll when you see it is about to hit you and hit its tentacle with your weapon. After you hit all of its tentacles, the Kraken will show its head. Ranged attacks are useful here, however the head can also be hit with melee attacks just before it uses its energy beam attack. Do enough damage and eventually he will go back in the water. Repeat this process to defeat the Kraken. 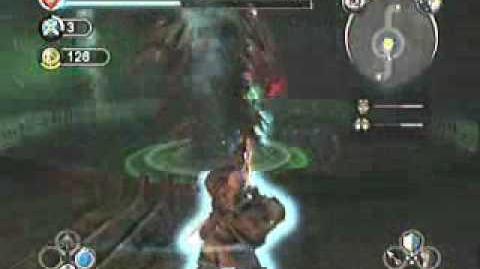