Knothole Glade is a location in Fable, Fable: The Lost Chapters and Fable Anniversary. It is a town situated on the Witchwood island off the Albion mainland, near the Witchwood Arena and the Temple of Avo. It is protected from the various dangerous creatures that occupy the island by a large wooden gate which is constantly guarded.

A village founded by the woodcutters of old.

The warriors of Knothole Glade are known to wield some of the best Axes in all of Albion.

The village is led by a chieftain who also runs the local Fist Fighters gang. In the middle of the town stands a statue of Scarlet Robe, a heroine popular for her balverine slaying exploits, because she was born there. Despite being one of the larger towns in Albion, Knothole Glade is perhaps the least safe, commonly suffering attacks from balverines and bandits. Because of the constant danger of surprise attacks, it seems that the town has permitted weapons to be unsheathed for immediate action - as opposed to Oakvale, Hook Coast, and Snowspire Village, where it is criminal to have a drawn weapon. However, for the most part, the town runs smoothly. There is a tavern, a weapons shop, and a tattoo shop as well as a general store. A unique element of the town is the shooting range.

There is also a Demon Door located in Knothole Glade. It is found in a secluded path south of the shooting range. It requires the player to shoot an arrow at his face. If the shot is strong enough, the Demon Door will open. A Hero with a low Archery skill can usually open this with a charged shot from Arken's Crossbow.

The towns main export is Wood and Axes which it supplies to all of Albion.

Knothole Glade is mentioned in Fable II, as part of the Knothole Island DLC. The inhabitants have made an exodus migration, because they had grown tired of constant balverine attacks and the weather. They had heard there was an island further to the southeast which allows its inhabitants to control the weather. The Knothole tribe decided it was worth a shot and set sail. Knothole Island was the result. 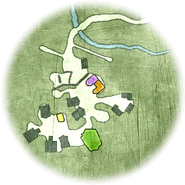 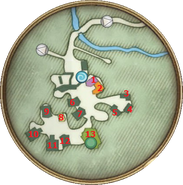 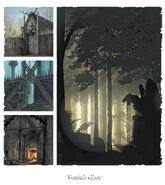 Fable The Lore Behind Knothole Glade