Jet is a gift in Fable, Fable: The Lost Chapters, Fable II, and Fable III. It is a piece of fossilized wood that can be purchased by a jeweller in Fable II. It resembles a black gem and it can also be sold for Gold.

Less a gem than a chunk of decayed and fossilized wood. You can probably find equally stylish examples from the wreck of a burned-down house.

Jet makes another appearance in Fable III as a gift. Due to the changes made in the gifting system, it is rare that your Hero will be able to gift it to a villager.

There is another variant of jet in Fable III, called Rare Jet. It is one of the seven rare trade items that exist and fetches a higher price at the pawnbroker, especially if it is not one of the four associated with your Gamertag.

Jets can be found at random in chests or dig and dive spots. They may also be received as gifts from villagers and family members. 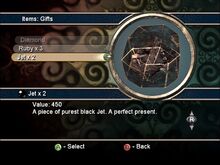 A jet, as it appears in Fable and Fable: The Lost Chapters.
Add a photo to this gallery
Retrieved from "https://fable.fandom.com/wiki/Jet?oldid=116749"
Community content is available under CC-BY-SA unless otherwise noted.