Jeeves is a character in Fable II. He serves as Lord Lucien's butler at the beginning of the game.

He greeted the Hero of Bowerstone and the Hero's sister, Rose, as children when Lucien summoned them and offered them a brief tour of Castle Fairfax, inadvertently introducing the future Hero to Garth. However, after Lucien killed Rose and supposedly killed the Hero, he went to The Spire, leaving Castle Fairfax and Bowerstone behind him. Before his departure, though, Lord Lucien fired the majority of his old staff, including Jeeves, as to ensure their silence.

Ten years later, the Hero sought out Jeeves for the location of Lucien's diary. After his dismissal, he had been spending most of his time at the Cow and Corset pub in Bowerstone Market. Still angry and bitter at his former master for firing him a decade ago, the now-decidedly drunk Jeeves didn't recognize the Hero at all, probably due to his presumption that they were dead. He asked for 1,000 gold in exchange for the location of the diary, insistent that the interaction be kept secret. Once the gold is procured, Jeeves admits that he had the diaries buried by Bower Lake, hoping to "sell them one day and make a profit off the old tyrant". He planned to buy a house with the money and, after receiving it, is never seen again. 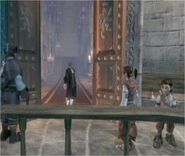 Jeeves, collecting The Hero and his sister Rose to meet Sir Lucien in Fairfax Castle.
Add a photo to this gallery
Retrieved from "https://fable.fandom.com/wiki/Jeeves?oldid=121718"
Community content is available under CC-BY-SA unless otherwise noted.