The Fable Wiki
Register
Don't have an account?
Sign In
Advertisement
in: Anniversary project, Featured Articles, Heroes,
and 3 more
English

"The Gods and Demons you fear and worship are as nothing to me!"

Jack of Blades is the main antagonist of Fable, Fable: The Lost Chapters, and Fable Anniversary. According to the Snowspire Oracle, Jack was already ancient by the time humans came into existence, and appeared in the unnamed world from the Void with the Court. He used his Mask to take over host bodies and thus live forever after William Black destroyed his original form. Whilst in his humanoid host form, he was never seen without the Mask, nor his original body ever shown. He is a master of strength, skill and will.

"There's nothing we could do. He has power like none I've ever seen."

It was revealed by the Tales of Albion that Jack of Blades came from a place called the Void. It is also revealed that he had come with the Queen of Blades and the Knight of Blades, who together were known as the Court. He and the others demanded that the people of Albion bow down before them. When the people refused, the Court "Burned Albion until the earth turned black and the sky was thick with smoke". When the people refused a second time, they lifted the sea into the sky and flooded the world. The third time they demanded worship, they claimed that they would bring peace, but again the people refused, so the Court twisted their minds until they went insane. Finally, the inhabitants bowed to the Court.

Later, in the future, when William Black was consulting a tome, Jack transported William from Albion to the Void. Jack tried to enslave William with an ornate sword, however, William managed to fight back and escaped, and at the same time managed to steal the sword from Jack, which was later discovered to be the Sword of Aeons.

Their second meeting consisted of yet another battle. William managed to break Jack's body, destroying his form for a time. However, Jack's soul was believed to have escaped and possibly took refuge in his mask.

Appearance in Fable: The Lost Chapters[]

In his human host form, Jack of Blades is a tall, lean man with an average build with red and yellow eyes. His attire consists of hooded robe that is crimson, which covers his shoulders and upper torso. It is fastened by a golden octagonal brooch, encrusted with five red gems, the fifth larger than the others. The robe also covers both of his arms, except for his hands covered with grey metal gauntlets. The rest of his body - chest, legs and feet - are protected by silverish-grey armour, adorned with small spiked protrusions and runes on his cuirass and greaves. His most noticeable features are his masks. On his face, Jack wears a white mask with red, purple, and gold decals. On his stomach, two more masks are situated. The second mask is broad and appears angry, with red and purple designs around the left side of the eye. The third mask is narrower, featuring red stripes around the right eye hole.

In his final form Jack is a colossal Dragon, with his entire body covered in darkish-brown scales. His back is covered in black scales, and features red and black fins along this aspect. Jack's eyes are now completely red whilst two, v-shaped horns protrude backwards, as well as two larger black horns that curve slightly upwards. Jack's mouth is full of razor-sharp teeth that remain visible even when his mouth is closed. His wings are vast and titanic, the insides are slightly tattered and is dark crimson with stocky, grey, vein-like lines; the outside of the wings are covered in a striped red and black, shell-like armor with black spikes curving backwards, whilst the insides of the wings have some of the shell-like armor situated in it that extend out of the range of the torn-area of the wings. Jack also has four legs with the front legs being smaller than his back legs, and having prolonged grey toenails and his fingernails being shorter, but still extensive, white in hue and take a diamond-like shape but the top part is longer than the rest.

"Fool, I have existed for millennia. You can't possibly comprehend what I am!"

After the last fight in the Doubles Round at the Arena, Jack of Blades announced to the crowd that he is back, and that the Arena was a perfect place to reintroduce himself to Albion after "spending an eternity" away from them all. He then tells the Hero of Oakvale to fight Whisper. If you kill Whisper, Jack will give the Hero an extra 10,000 gold. Jack confronts the Hero as he is staring up at a statue of his mother in the Hall of Heroes. Jack tells The Hero that he knows where his mother is, and gives some other information before departing.

The next time the Hero encounters Jack is when he tries to break Scarlet Robe out of Bargate Prison, though he stops the Hero, imprisoning him for one year. The Hero meets him again when he hears of his plan to take over Albion. Despite all efforts, the Hero fails to prevent him from activating the Focus Sites. The Hero eventually fights Jack after he kills Scarlet Robe, in which he implies to not only have killed his mother, but also his father. When the Hero defeats him, he makes the decision to either kill his sister, Theresa and keep the Sword of Aeons for himself or spare Theresa and throw the sword into the black abyss from which it was summoned. In Fable, the Hero is then given his mask as a trophy, though in Fable: The Lost Chapters, it is made a quest item.

After Jack's defeat in his humanoid form, Briar Rose informs the Hero and Guildmaster that the Demon Door outside the Guild has awoken after centuries being dormant. Using the Mask to satisfy the Demon Door and thus enter it, he discovers the Prophets of the Fire Heart. Later, Jack takes the form of a dragon. After defeating him once more, the Hero will have the option of either throwing the Mask into the lava and ridding the world of Jack forever, or will eventually give in to temptation, and put on the Mask, essentially becoming Jack's new vessel. Upon donning the Mask, Jack takes over his body before raising his arms triumphantly and declaring in Jack's voice, "I told you I could not be killed so easily, Hero!", before laughing manically. If you choose to wear the mask, and do not skip the credits, then afterward you appear outside of the Archons Folly with horns, wearing Jack of Blades' mask.

In the e-book, Fable: Jack of Blades, it first appears that Jack is ruling over the people of Oddwood aided by his bandit allies to keep "order". However, at the end, Jack is revealed to actually be a bandit by the name of Fred. It is implied that Xiro, the hero of the story, could actually be Jack of Blades in disguise. 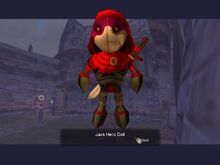 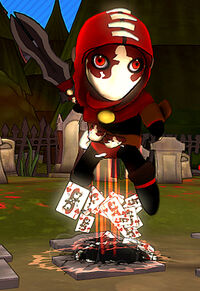 An ancient evil, Jack of Blades once ruled Albion as part of the Court before his defeat at the hands of William Black. However, Black was only able to destroy Jack’s physical form, and his spirit lived on in his Mask. He continued his reign of terror by possessing any being unfortunate enough to put it on, and Jack was not truly vanquished until the Hero of Oakvale destroyed the Mask at the Bronze Gate. While this Doll does appear to be wearing the Mask, it’s probably safe to assume Jack has not returned as a tiny puppet, ready to enslave Albion with acts of unspeakable cuteness.

— Description of Jack of Blades from Fable Friday

"Hero, are you having trouble hitting things?"

— Jack of Blades during Collecting an Arena Soul

"Come now, it isn't polite to leave without saying goodbye."

"I have returned. After an eternity away from you all, Jack of Blades is back!"

— Jack of Blades during the Arena 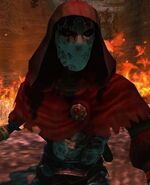 Jack of Blades as he appears in the original and Fable: The Lost Chapters.

Chamber of Fate fresco depicting Jacks observation of the Hero of Oakvale through the Champions Seal. 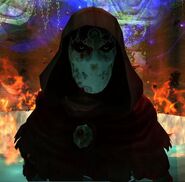 Jack after activating a focus site.

Remastered Jack of Blades as he appears in Fable: Anniversary.

Jack of Blades art work that appears in Fable Fortune

Theresa overlooking Jack of Blades' deceased body after his defeat by the Hero of Oakvale.

Jack of Blades as he appears in Theresa's flashback in Fable: The Journey. 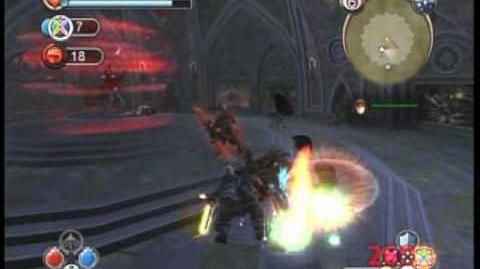 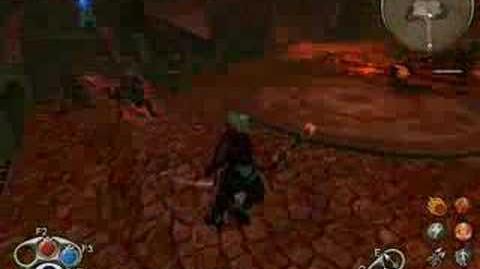