Hook Coast is a location in Fable, Fable: The Lost Chapters and Fable Anniversary. It is a port town located on a small island off the mainland Albion. It has a very tall lighthouse that contains a silver key chest and a silver key. Physically, it is pretty barren of most vegetation except for a few evergreen trees, considering it is always snowing. There are several shops including a weapons shop and a tavern. The only way Hook Coast can be accessed is via a Cullis Gate.

A place of strange portents and secret inhabitants.

It is revealed by the Snowspire Oracle that during the time of the third Archon, a group of monks came to a barren coast and built a monastery on it to escape the cities and people in the rest of the world. Later other people arrived and built a town around the monastery. Years later when the monks predicted the destruction of the Old Kingdom, they used the last of their strength to cast a barrier around Hook Coast. The barrier succeeded, but at a cost. All the monks had died and the power from the explosion and barrier left the imprints of where the monks stood. Since then, Hook Coast has been the only intact remnant from the Old Kingdom. The economy centres around fishing.

The only way to reach Hook Coast for the first time is through the Ancient Cullis Gate in Darkwood. Once the Hero arrives in Hook Coast, the Cullis Gate will be active and can be used by the Hero anytime. Hook Coast is also where the Hero of Oakvale finds out that Maze was working with Jack of Blades to help recover the Sword of Aeons. After passing through a magical barrier which the Guildmaster needed to take down with an incantation spoken through the Hero's guild seal, a cinematic scene plays where the Hero finds out that Jack captured Theresa and brought her to the Abbey in Hook Coast, where Maze began a complicated ritual on his behalf to summon the Septimal Key. The Hero soon appeared, searching for Jack. As Maze attempted to trick the Hero to believe Theresa was a danger, Jack struck him from behind and trapped him in a magical cage. Maze completed the ritual and was ordered to take them to the Chamber of Fate, but after Jack left, Theresa used her last ounce of Will to free the Hero before Maze warped her away.

The Hero then fought Maze through town and across to the lighthouse, where he finally killed him. On his dying breath, Maze revealed that it was his fear of death, which he considered his mission to avoid, that motivated him to aid Jack of Blades. Maze bitterly admitted that he failed in that mission. Jack later said that, as he had outlived his usefulness, Maze would have died anyway.

The lighthouse in Hook Coast is also used by the Hero of Oakvale to summon the Ship of the Drowned with the Fire Heart. This ship allows the Hero to reach the Lost Bay in the Northern Wastes. 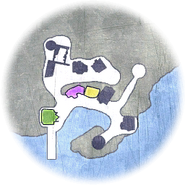