The Fable Wiki
Register
Don't have an account?
Sign In
Advertisement
in: Anniversary project, Featured Articles, Fable Enemies,
and 3 more

Hobbes are small pests which resemble short and stout goblins. They have appeared in every Fable game to date.

Hobbes have been described in the Creatures of Albion Book III as the "under-race of the dells and hollows." As such, they are said to have their genetics entwined with the mud and slime of the deep country. According to legend, the very first hobbes were lost children who had their souls stolen by dark Nymphs. They can still transform lost children into more hobbes, but the sheer number of hobbes indicates that they have another method of reproduction, given that there isn't a pandemic of lost and kidnapped children throughout Albion.

Although often considered dim-witted throughout the long history of Albion, Hobbes appear to have cognitive abilities, evidenced by a degree of ingenuity and social structure. They are also in possession of a surprisingly advanced culture, exhibiting traits of salvaging, locksmithing, construction, adoption, and even religion. As befitting their title, hobbes make their home in a variety of intricate cave systems, oftentimes leaving to ambush Humans. While hobbes have limited social capabilities they almost never appear alone. On at least two occasions, hobbes have accepted a human into their society and vice versa.

They come up to a human's waist, are bald and have light grey, red, or black skin.

Hobbes can mainly be found in Greatwood and Darkwood areas and Hobbe Cave. The hobbes have skilled axe wielders and mages with a shadow ball attack. Most hobbes are weak but they make up for it by attacking in large numbers. The hobbes are one of the enemies fought in the The Arena. To open the Demon Door in Darkwood requires you to fight ever increasing waves of hobbes. A hobbe called Maxley once made it to Bowerstone, and fooled the town with clothes he stole from a rich trader. He was killed after he spoke his first word to the townsfolk.

Hobbes are weak against flame, sharpening, and lightning augmentations. In the original Fable (as well as Fable: The Lost Chapters) there are four basic classes of hobbes (100 hps/120 hps, 300 hps, 600 hps, and 900 hps): 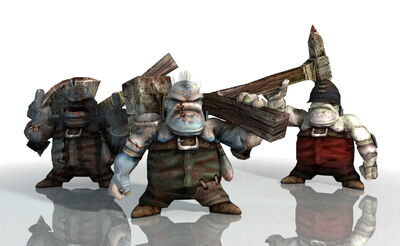 In Fable II, hobbes come in more varieties than in Fable. Their skin is mostly grey. Several hobbes use Will, but the commentators in the Crucible remark that they use natural magic, the magical power that is created from the Earth; rather than Will, which is a magical energy created from the soul. This could be an error, since Will is akin to magic, though it could be that hobbe mages can only control the magical Will energy around them by using their staves. The Hobbe Cave is located in Rookridge in Fable II. In the Crucible, the Hero must fight some hobbes in two of the rounds (three counting the troll match). Folklore of the time claims that hobbes were once children who wandered into caves and were turned into hobbes by dark magic. Hobbes in the Hobbe Cave appear to hide in barrels, and sometimes have remains of the barrels hanging off them. Hobbes are actually cowardly, and shall run amok slamming into walls and jumping off cliffs, especially when you kill the stilt hobbes or mage hobbes. Sometimes after slamming into walls, they may die, without the player even having to lift their sword!

Hobbes in Fable III are more advanced, and use guns more often to support melee warriors. Note that when firing, hobbes are thrown backward, occasionally even rolling. Stilt Hobbes were evidently scrapped probably because they were too vulnerable. Hobbes now inhabit The Hole, or the Mistpeak/Millfields Monorail station. The most common hobbes are depicted below:

Hobbes are revealed to infest the Edgelands of Albion in Fable: The Journey. Because the Edgelands are a frontier land with little in the way of permanent settlements, the Hobbes are unable to get their hands on the more advanced industrial technology of Fable III, such as guns. Therefore, the Hobbes encountered in Fable: The Journey seem more primitive, relying on old maces and crossbows.

Hobbes are a constant problem in the Edgelands, which is made quickly evident in Fable: The Journey. Their constant ambushes, roadside forts, and mines all present a problem both to the local inhabitants and to Gabriel as he progresses on his journey. In addition to fighting through Hobbe forts and doing battle with Hobbe soldiers, Gabriel also encounters mounted Hobbes, riding some kind of bull.

A hobbe mage in Fable.

A black brute hobbe in Fable.

Concept art of a Hobbe in Fable: The Lost Chapters.

Concept of a hobbe child catcher.

A hobbe in Fable II. 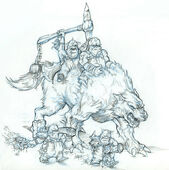