The Hero dolls are collectible dolls that appear in Fable, Fable II and Fable III. They appear as collectible items in the first two games, not giving the player any stat boosts or other upgrades besides their novelty in itself, and appear again in the quest "The Pen is Mightier..." in the latter game.

In Fable and Fable: The Lost Chapters nine dolls appear, each corresponding to a specific hero: Hero of Oakvale, Briar Rose, Maze, Scarlet Robe, Scythe, Thunder, Twinblade, and Whisper. These are acquired in various ways, but most of them can only be obtained through gambling games dotted all over Albion's bars. Additionally, there is a Quest to collect all of these dolls and the reward is a doll of Jack of Blades.

Jack of Blades
Add a photo to this gallery

In Fable II, dolls of Garth, Hammer, Lucien Fairfax, Reaver, The Hero (could only be obtained from playing the promotional game on Xbox.com or trading for it in-game with someone who has), and Theresa. In contrast to the first game, these do not have an attached quest but rather an achievement for collecting all of them. Interestingly, one must have Xbox Live to collect them all because only one doll appears in your character's game world. This makes them highly valuable in the online mode, and they are a high price item, often being traded for large quantities of gold, legendary items and/or other hero dolls. A random doll can also be found in the Westcliff Shooting Range as a second place prize. Also in See the Future, there are two random dolls that players can, provided their dog is a level five treasure hunter, dig up in the new areas. One of them is in the Celestial Keep (reachable using the Cursed Skull once you complete it) through a gap in the wall by the living statues on the right side. The other one is in the village inside the Snowglobe by a tree, near the entrance of the Shadow Court. 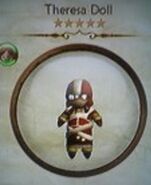 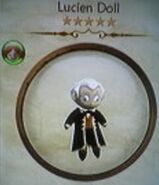 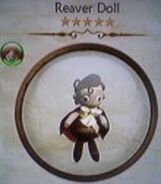 Reaver
Add a photo to this gallery

In Fable III, during the quest "The Pen is Mightier...", the player is tasked with collecting "The Invocation of the Watchers" from Bowerstone Old Quarter after locating 11 rare books. After using a key to go through a cell door, the player can find Hero dolls from Fable II set up on a small table in the second room, on the left. The collection consists of Garth, Hammer, Reaver, Theresa and Lucien Fairfax. The Hero doll is found on the floor to the right of the table. They cannot be picked up, but a sign next to them reads: "A complete collection of rare dolls. They have been played with, so no longer in mint condition.".

Retrieved from "https://fable.fandom.com/wiki/Hero_Dolls?oldid=136744"
Community content is available under CC-BY-SA unless otherwise noted.