Hal's Outfit is a set of clothing that belonged to Hal available only with the Limited Collector's Edition of Fable II. A card was included in the box for redemption via Xbox LIVE; when activated, the code adds Hal's Outfit and Hal's Sword (along with other content) to a chest inside the Hero's Guild.

They are modelled after the MJOLNIR armour worn by the Master Chief in Halo, and indeed the description explains that these items belonged to an ancient hero named "Hal", known as the "Master Chief", who fell to Albion from another world. 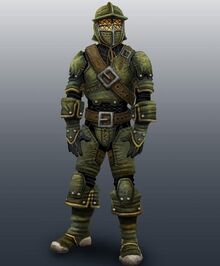 "Long ago, when Albion was still under the rule of the Old Kingdom, a rift in space opened a portal between dimensions. Through the rift stepped a warrior of immense power, clad in green armour and carrying a crystal sword. Though he never revealed his real name, he was known to all as 'Hal'." 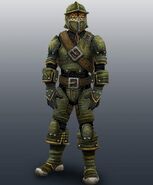 The Hero of Bowerstone in Hal's Outfit with Hal's Sword equipped.