The Gypsy Camp is a subarea of Bower Lake. It is a small camp consisting of several caravans, surrounded by a protective barricade. While this quaint settlement has a relatively poor economy, several traders make do in the area. The character first comes across this town with Theresa during childhood, and begins to train in the camp under Theresa for ten years to become a Hero. Upon reaching adulthood, he/she will own a caravan. If you wish, your character can rent this caravan out for 7 gold pieces, the base price, every five minutes.

This community consists of 12 caravans, surrounded by a wall, and is home to many of Albion's wandering gypsies. The camp has 3 shops, which consist of a tattooist, a stone cutter and a general trader, who have set up shops in the caravans at the center of the camp. A storyteller spreads the stories of Albion to the children of the camp, who enjoy running through the trees and listening to the tales of Albion's Heroes of old. The campers enjoy their life of sleeping around the fires to telling the gypsy's tales of travels far and wide. The camp does not have permanent guards, but the gypsies defend their homes against any enemies who might wander up the trail underneath the fortified bridge into the camp. The camp site begins with a two star economy, which you can boost by spending plenty of gold at the general store.

If you are short on money and need supplies, the gypsy camp makes a great trading stop. In addition, given the fact that you begin the game with a modest household, you have the opportunity to start your very own family early on. Or, if you are so inclined, you can begin your career as a real estate tycoon.

During the 50 years between Fable II and Fable III, Bower Lake has been transformed into Millfields, and the bridge to the Gypsy Camp has collapsed; possibly because of Reaver. After fixing the bridge to enter the former Gypsy Camp, there is nothing except the remnants of what once was the camp, and a letter describing Reaver's involvement in forcing the Gypsies out of their camp. After travelling throughout the remains of the Gypsy camp, it is discovered that the Gypsies, along with other outcasts of society, have moved into the neighbouring area. With the Hero's help, they found the village of Driftwood. They are now called Eco - Warriors.

The Hero by their caravan and chest 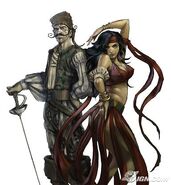 Concept art of a male and female Gypsy.
Community content is available under CC-BY-SA unless otherwise noted.
Advertisement