The Fable Wiki
Register
Don't have an account?
Sign In
Advertisement
in: Anniversary project, Fable, Fable II,
and 2 more 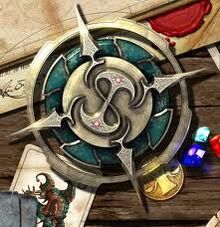 The Guild Seal is a large, disk-like object adorned with the symbol of the Heroes' Guild that symbolizes the graduation of a Hero. The seal also serves a practical purpose, however – it can also be used to teleport around Albion through the system of activated Cullis Gates scattered across the land. In addition, it enables anyone with knowledge of the device to communicate with the user.

The Guild Seal is used by several characters in Fable. The Hero of Oakvale has one to communicate with the Guildmaster and to use the Cullis Gates. Briar Rose, Thunder and other Heroes constantly use it to teleport from one place to another. Scythe also used one, but not much is known what he used it for. It is known that he destroyed his when he travelled to the Northern Wastes. The reason for this is so that he wouldn't activate the Cullis Gates, thus preventing the traitorous Maze from following him.

There is also a variant used by the henchmen to teleport with you.

A second variant exists that is used to teleport guards and trainee Heroes into the battle to help the Hero when Jack of Blades is trying to activate each of the four Focus Sites in his attempt to reclaim the legendary Sword of Aeons.

In Fable II the Guild Seal is given to the Hero of Bowerstone by Theresa at the beginning of the game in the form of the Bower Lake Tomb Seal, which is used to unlock the door to the Guild Caves. It is also used by Theresa to talk to the Hero. The Guild Seal is no longer used to travel around the world as now you are able to fast travel anywhere whether or not there is a Cullis gate.

Up until the beginning of Fable III, the protagonist has shown no signs of being a Hero, exhibiting neither Strength, Skill, nor Will, until Sir Walter Beck presents the player with their father/mother's guild seal (the same seal that Theresa gives to the Hero of Bowerstone at the beginning of Fable II), which is located in the Hero of Bowerstone's crypt. This in turn gives the Hero access to the Road to Rule, enabling him/her to meet Theresa, unlock their true power as a Hero, and learn of the need to start the revolution against Logan.

The Guild Seal once again functions as a communications device; Jasper uses it to communicate with the Hero, giving them important information.

The Guild Seal also allows the Hero access to the Reliquary, under the Brightwall Academy and becomes a Trophy in the Trophy room of the Sanctuary or a mounted house decoration.