Greatwood Lake is a location in Fable, Fable: The Lost Chapters and Fable Anniversary. As its name would suggest, is home to a large, open lake. At its edge is a large waterfall, which at some point used to be parallel to a large bridge - which is now broken. Greatwood Lake is home to a Silver Chest (containing an Elixir of Life), a silver key, and most importantly: a Focus Site. Bandits, wasps and traders often roam this area, as well as the occasional Earth Troll or Nymph. Greatwood Lake connects to Greatwood Entrance, Greatwood Gorge, as well as Orchard Farm.

The glorious lake of Greatwood. The highlight of a trader's journey when not overrun with Bandits. 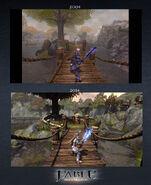 Comparison between Fable and Fable Anniversary 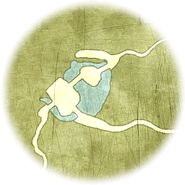