Greatwood is a sprawling forested region. Greatwood is located between Lookout Point and Darkwood.

Encompasses the entirety of Greatwood Lake, Greatwood Gorge, Orchard Farm, and a small cottage that is home to a Master Fisher. Annual Fishing Contests are hosted by the Master Fisher with varying prizes from Silver Keys to rewards of a more valuable nature (Only available in Fable: TLC and Fable Anniversary).

Greatwood serves as a connection point between Lookout Point and Darkwood, as well as branching off into several smaller areas. Though initially inactive there is a Cullis Gate located in the area that can be used by the Hero for ease of travel to and from the area. Though frequently used by travelling Merchants, the area is infested with numerous swarms of Beetles and Wasps as well as the occasional Bandit Camp.

Towards the centre of the area is a large Bandit camp. Originally established to operate an illegal toll on the nearby bridge, the camp later abandoned this practice after losing several guards and toll men in a battle with The Hero of Oakvale, who had the choice of paying the toll or slaughtering the bandits. Whether or not he killed them, they inevitably came to strife after a shortage of gold on the Hero.

Brightwood in Fable II is geographically close to the region of Greatwood from Fable and Fable TLC; however the Lionhead developer, Gradius1, has confirmed that they are not the same place. 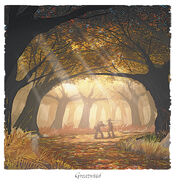