View source
watch 02:59
Wiki Targeted (Games)
Do you like this video?
Play Sound

Glory is one of the playable Heroes in Fable Legends.

Daughter of a rich merchant, Glory grew up in luxury. If she wanted something all she had to do was smile, and Glory was very, very good at smiling. In fact Glory was very, very good at most things. The most intelligent, charming and accomplished girl in the town, she was, of course, loved by the ‘simple’ folk that lived there. The townsfolk made way for her when she went out into the town, they bowed, they scraped and they gave her tokens of admiration. Life was as wonderful as her skills and beauty deserved. . . At least so Glory believed.

Believed until the day she overheard a townsman mutter, ‘Does she think she’s better than us?’ ‘Think’? Glory didn’t ‘think’ she was better, she knew it. There wasn’t a girl in the town could match her in looks, a student (or tutor) who compared in their studies, not a soul who came close to her in wit. Certain of her place in society Glory would have dismissed the incident as a one off; this was obviously just a townsman disgruntled with his lot. Sadly, with her ear now sensitive to such grumblings Glory now started to hear plenty more of this sort of talk around the town. ‘Who does she think she is?’… ‘It’s easy when your father’s rich’… ‘She’s so lucky’…

Easy? Lucky? Glory might have been born beautiful and clever, but her skills were born from hard work. People were jealous of her gifts, but that didn’t mean she wasn’t a hard worker. Unfortunately, when she raised this with her father, he agreed with the townsfolk; Glory was lucky. Lucky to get the things she did, lucky to have him as a father and if she damn well wanted to stay lucky, then Glory would turn her mind back to being a perfect little daughter who kept her whining, jumped-up little trap shut.

If there was anyone who worked hard, it was Glory’s father and he expected his daughter to put up, shut up and do as she was told. If she didn’t he would make sure she learned some real lessons. Glory was not only bright enough to understand this threat and how to handle it, but focused enough to mark it in her memory. If anyone was going to learn a lesson from this moment, in the long-term it was going to be daddy and the townspeople. ‘Lucky?’ What was lucky about being born so talented in such a backwater town full of, her father included, such ‘backwater’ people? Glory would show them who they really had in their midst.

Luck, it would seem, was listening to Glory and it introduced her to the daughter of one of her father’s mercantile contacts. This poor girl was behind in her studies and arrived in town with a travelling tutor. The tutor was an old adventurer with tales to tell of a big, exciting world outside the town walls, of places well beyond where Glory had ever ventured. Glory’s horizons, it appeared, could be wider. What’s more, the tutor would teach Glory how to use her strength of personality and convert it to Will Power.

Glory took to magic like a spark to a haystack, turning out to be quite brilliant at magic. Now here was something of her own, something bigger than her father and these small-minded townsfolk. Glory began practicing her Will Power when possible, even venturing out of town to incinerate marauding Hobbes and pick up rewards from local Quests just as her tutor had done. Will Power was not just a way out of her father’s shadow, it was a doorway to the respect she’d always wanted. The respect she was owed.

Glory’s father was extremely unimpressed. Pretty little trophy daughters should not, in his mind, cause things to explode. He duly forbade her to practice magic again. Addicted to her new hobby, Glory duly refused. Her father pointed out that he paid for things so he was in charge and Glory could go back to being the quiet little, respectful daughter he’d paid for, or she would pay for the consequences. Glory in turn pointed out that she could now make things explode and contrary to her father’s thinking, that put her in charge.

Her father wasn’t a man to be threatened, especially not by his precious little daughter and he instructed his guards to teach her a lesson. Precisely what this lesson would have been is a mystery, for not long after her father and his guards escorted her away there was a series of loud noises and a puff of smoke from the hall.

Shortly after Glory emerged from the building, and from that point no one, neither the guards nor her father, were ever seen again. Although she claims to be none the wiser as to what may have happened to him, it appeared that Glory had found a way out from under her father’s shadow.

Armed with her Will Power and anything she could lift from the family vault (it was her inheritance after all), Glory made her way through the town one last time. As she did, Glory became aware that in the eyes of the townsfolk around her, there was more than mere respect, there was fear. If Glory could gain such looks with the meagre powers she had right now, just imagine what she could accomplish with a little more? Somewhere out there, she knew, was the chance to become much, much more powerful. She would go out and learn more about the world, witness the things her tutor had talked about and as a powerful and respected Will User, she would cast a shadow of her own. 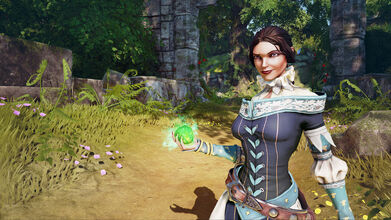 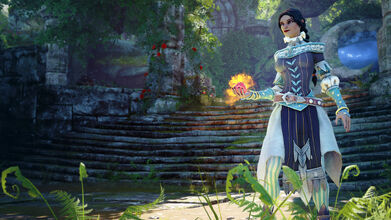 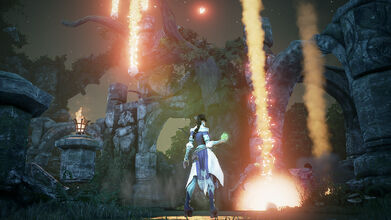 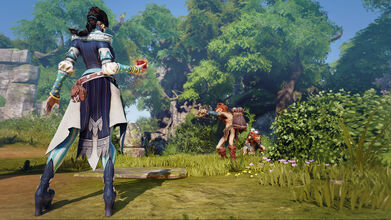 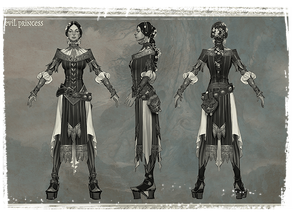 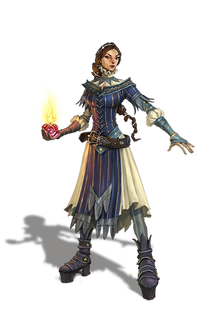