Giles's Farm, or Brightwood Farm, is an area of Brightwood in Fable II. The farm is involved in the Red Harvest and Cold Comfort Farmer quests, and the area changes based on which one is completed.

After completing The Blind Date quest, Giles and his son, Rupert, decide to move to the city and Giles's Farm is now up for sale. The price is about 75,000 gold, but it's worth every ounce of gold due to the contents of its cellar and the sizable rent you can gain from it. When you make the purchase, you'll receive Giles's Letter which points you to a key in the upstairs cupboard. Go up and grab Giles's Portcullis Key, then proceed to the back of the farm's barn to enter the Farm Cellar.

Once you're through the locked portcullis, you'll have to dispatch several waves of Hollow Men as you navigate the old cellar. After stepping on a few pressure plates to open some more closed portcullises, you'll come to a sand-filled room with a Silver key and a dig spot. Crack out your Spade and use it to dig up a legendary blunderbuss called The Enforcer. It comes with lucky charm and barkskin augments, and has a base damage of 177, the highest in the game.

If you choose not to do the Cold Comfort Farmer or Red Harvest quest, the farm will eventually fall into disrepair and become non-purchasable. But the key can be found by digging Giles' grave and hence The Enforcer can still be obtained.

After the hero's return from the spire, if the quest Cold Comfort Farmer has been completed, the farm will have increased largely in size, with new buildings, a woodcutting job and many villagers.

Address: Brightwood
History: This farm has a long history of fighting against adversity. Originally built by an Oakfield family, who saw Brightwood as a perfect place for a new farming community. They soon clashed with bandits though, who have continued this a target through the years. By the time the former guard Giles bought it, it had been abandoned for decades.
Bonuses: Bodybuilder, Tough as Nails

Note: Although the bookcase appears as a dresser, if you enter redecorate mode you will clearly see that it is a bookcase.

After using the house as a marital house for Lady Grey, you cannot assign the house to be rented out, sold, or used for another marriage. This is still true if Lady Grey divorces you. It still only gives the options to redecorate or set budget. Also, remarrying has no effect on your ability to use the house. 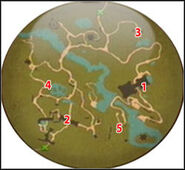 Map of Giles's Farm
Add a photo to this gallery
Retrieved from "https://fable.fandom.com/wiki/Giles%27s_Farm?oldid=144990"
Community content is available under CC-BY-SA unless otherwise noted.