"I told them to go hang. So, they came right back and killed her - killed my wife, right in front of me! You've any idea what that's like?"

— Giles, regarding Ripper and his gang

Giles, referred to as Farmer Giles, is a character featured in Fable II. Formerly of the city of Bowerstone, Giles was a guard for roughly 30 years. Afterwards, he and his wife Jennifer and their son Rupert moved to Brightwood and started a farm. Unfortunately, shortly after relocating, Giles and his family began to be tormented by the bandit Ripper and his clan.

Giles first appears during A Hero's Tale, in which he is pursuing a young Arfur through the streets of Bowerstone. Arfur is in possession of stolen goods, which he passes on to the Hero of Southcliff before hiding. Giles confronts the Hero, where the Hero must choose to either point out Arfur's hiding spot or attempt to deceive Giles. Either way, Giles finds Arfur and drags the Hero back to their house. However, the Hero's house and family has been set upon by a White Balverine, which also attacks Giles. Giles is wounded, but survives. Orphaned, if the Hero chooses to live a good and righteous life, then the Hero will train under Giles' tutelage.

Years later, after having moved to Brightwood with his family, Giles receives trouble from a local bandit by the name of Ripper. What started as minor skirmishes quickly escalated after one of Ripper's men, Ethan, murders Giles' wife Jennifer. Distraught, Giles begins plotting his revenge.

The Hero of Bowerstone is given two options in order to solve Giles' problem.

If playing on the good path, the Hero heads to Giles's home directly and offers assistance, thus starting the Cold Comfort Farmer quest. Giles sends the Hero to Ripper's camp, where the Hero wipes out his whole gang. Afterwards, Ripper confronts the Hero, only to be defeated. After he surrenders, the Hero can choose to kill him outright, or take him to Giles. Once he is Giles' prisoner, Giles binds him and escorts him to Bowerstone where he will be hanged for his crimes.

Alternatively, if playing on the evil path, the Hero can meet with Arfur under the Bowerstone Bridge, where he will direct the Hero to Ripper's camp. Once there, the Hero signals for Ripper and company to come out of hiding, and they arrange for the Hero to assault Giles' homestead, which is guarded by multiple guards after Jennifer's murder. Once the guards and Giles are killed, the Hero receives a key to the basement which contains the "treasure" that Ripper and his gang so desperately desire. In the basement, locked in a chest, is Giles' Manuscript - a journal detailing Giles' pursuit of the Ripper gang back when he was a guard. The journal details a raid in which Giles and numerous other guards rushed into a cave in which the Ripper gang was hiding. They were unable to make an arrest, as all the guards fell into fits of hysterics upon see Ripper and many of his cohorts dressed up in frilly womens' clothing, dancing and singing. Once the manuscript has been read, Ripper, Ethan, and another crony confront the Hero and attack, only to be killed.

If the Hero chose to help Giles rather than murder him, upon returning from the Spire, they will see that Giles, who has been reunited with his son, Rupert, has flourished; in the 10 years that the Hero was absent, Giles's Farm has grown immensely, with a barn, a large farmhouse, and multiple fields for crops. The farm even has employees who reside on the land as well, sleeping in the barn.

Giles is delighted to see the Hero once more, and asks another favour: help his son find a wife, thus starting The Blind Date quest. Upon talking to Rupert, in order to find out his ideal woman, Rupert reveals that he is not interested in girls and is, in fact, a homosexual. The Hero can choose to try to find a wife anyway, for evil points, or attempt to find a suitable husband, for good points. Either way, upon returning Rupert comes out to his father. Giles is happy for his son and agrees to move to Bowerstone with him, and the pair are never seen again.

Once Giles and Rupert have left the farm, it becomes available for purchase. Once it has been bought, a key to the basement can be found, in which the Hero will find Giles' old rifle, the Enforcer. However, if the Hero murdered Giles, then returning to the farm after the time spent at the Spire, the Hero can simply dig up Giles' grave to receive the rifle.

When first approaching the farmhouse, before knocking on the door, Giles can be heard singing and continues to sing until he is interrupted. Although never explicitly stated, judging from the lyrics of the short song it is safe to assume he is singing about his wife.

Why do you lie there
So still, pretty lady?
Morning has come
And sun is reigning.

When will you hold me again,
Pretty lady?
Night time has come
And I'm still waiting. 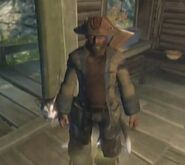 Giles as he appears in Fable II. 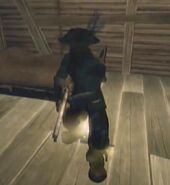 A wary Giles greets the Hero.

Giles and his son, Rupert.
Add a photo to this gallery
Retrieved from "https://fable.fandom.com/wiki/Giles?oldid=129972"
Community content is available under CC-BY-SA unless otherwise noted.