The Frying Pan is a weapon that can be found in Fable, Fable: The Lost Chapters, and Fable Anniversary.

To get it, you must find all six treasure clues and then dig it up in Orchard Farm. If you obtain it before you have all six clues, it will cause no damage and will not have any augment slots.

Though the pan's damage is relatively low, its five augment slots potentially make it a very powerful weapon. Only four slots will appear on screen, but as long as you put all five augments on the pan at the same time (not leaving the weapons menu), it can have five.

In Fable Anniversary, this weapon will appear to have only three augment slots, but four augments can be added, if you do them all at once. The number of augment slots has been returned by the recent patch.[1] 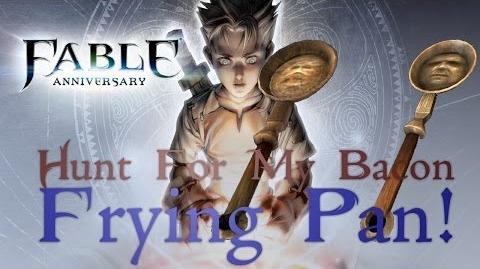