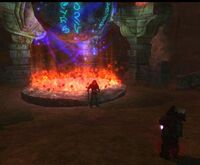 Focus Sites are structures scattered around Albion that serve some purpose in the ritual required to summon and empower the Sword of Aeons. They are visible throughout the game, but their purpose does not become evident until Jack of Blades activates them using the Septimal Key during the Try to Stop Jack of Blades quest.

The sites take the appearance of a spherical, patterned rock surrounded by a base and Old Kingdom structures.