Facemelter is a legendary rifle in Fable III which may be found in one of the three weapon shops.

This weapon's name is a bit misleading, as it can actually melt more or less any part of an opponent's body. 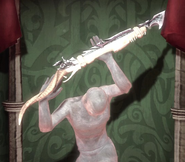 Add a photo to this gallery
Retrieved from "https://fable.fandom.com/wiki/Facemelter?oldid=146407"
Community content is available under CC-BY-SA unless otherwise noted.