Downloadable Content is delivered using the Xbox Live Marketplace that is included with any Xbox 360 gaming system. The original Xbox had a similar system, but was not as widely used. Content was purchased via "Microsoft Points" which in turn were purchased using money. 80 Microsoft Points were roughly equivalent to US$1. Microsoft Points were retired in August 2013, at which point DLC was transitioned to local currency.

Due to Fable II's co-op mechanic, Lionhead Studios decided to release Knothole Island and See the Future as free, and paid download.

The free download will allow you to acquire a few items from the Knothole Island download. These are available from Gordon in the Bowerstone Market. The free download will also allow you to complete the entirety of the Knothole Island and See the Future downloads only as a Henchman, but you do not receive the DLC achievements. This means that you will not be able to keep any of the acquired items, and you will only be able to play it with someone who has purchased the Premium packs. An Xbox Live Gold subscription is required to download the free edition.

The Premium pack allows for the full set of features, achievements, and items. For Knothole Island, this allowed the player to go to the island alone and complete all the quests. This also allowed the player to bring another player along, so long as they have either the Premium Edition or the Free Edition. The Knothole Island Premium Edition is available for 800 Microsoft Points. See the Future also has a Premium Edition, which costs 560 Microsoft Points, which is equivalent to £4.67 or $7.00. An Xbox Live Silver subscription is required to download the premium edition.

The Fable II Bonus Game Content pack includes all the digital content originally released with the Fable II Limited Collectors Edition. This includes the Hall of the Dead, The Wreckager, and Hal's Outfit and Sword.

Note that Fable II Pub Games is not a DLC for Fable II. Rather, it is a stand-alone Xbox Live Arcade title tied to Fable II with item transfers. 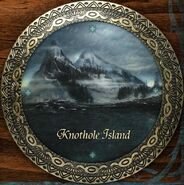 A View of Knothole Island