NPC Interaction within the world of Fable III is a complex system that involves Quests and Expressions. How the Hero interacts with the citizens of Albion will determine how they respond to the Hero and can affect the Hero's morality.

When you approach a person in Albion, a colour-coded bar at the bottom of the screen shows you how this person feels about you. It also shows the NPC’s name and your current relationship level with them. When next to a person you will have the option to interact with them, use the (A) button. Later you will gain the ability to ‘Hold Hands’, use the left trigger (LT), to take the hand of a person and lead them around. Some NPCs will not interact with you.

Once you interact with a person, press the right trigger (RT) to see more information about them. Pressing the right trigger will display the character box which shows you their wealth status, personality traits, and sexual orientation and show how many guild seals you can earn from them. Earning guild seals depends on making them feel strongly about you. Building relationships through interacting with people is one of the main ways for you to earn guild seals.

To increase your relationship status with a NPC from one level to the next, the Hero performs expressions to maximise the current relationship level. When the maximum for the current level is reached, an exclamation mark icon will appear over the NPC’s head and they will ask you to perform a task to move to the next level of relationship. 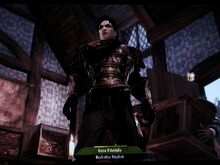 There are five relationship levels. In-game a slider bar will show the current level and progression.

Interacting with children and guards is slightly different. You can never use the ‘Hold Hands’ with a guard or child, except for your own children. They also do not have a ‘Relationship Level’. When you approach a child or guard you will only see their name. You can use the right trigger to see their personality traits and every child only has a single guild seal to be earned.

Occasionally you will have other interaction options appear and will be designated with the ‘Right Bumper’ (RB). These can include; give money, give autograph, propose marriage. Giving money counts as a ‘good’ action and will increase your moral standing slightly.

Once you unlock the Entrepreneur Pack, your Hero can Haggle with shopkeepers to get a better price. When buying/ selling an item, (X) will allow you to haggle and switch to allow you to use expressions.

Learn how to haggle and own shops and you'll soon be running your own business empire.

Each inhabitant of Albion has a set of descriptors that affect how they will interact with the Hero and the world around them.

General traits are found throughout the populace of Albion.

Specific traits are found only on certain segments of Albion's populace, based on 'type' or 'region' as interfacing ethno-cultural identity.

Retrieved from "https://fable.fandom.com/wiki/Fable_III_NPC_Interaction?oldid=147730"
Community content is available under CC-BY-SA unless otherwise noted.