Fable, originally developed under the name Project Ego, is a role-playing video game for Xbox, Mac OS X, Windows, and an Xbox Originals game on the Xbox 360. It was developed by Big Blue Box, a satellite developer of Lionhead Studios, and was published by Microsoft. The game shipped for Xbox on 14 September 2004. An extended version of the game, Fable: The Lost Chapters, was released for Windows in September 2005 and Xbox in October 2005; Feral Interactive ported the game to the Mac platform on 31 March 2008 and Robosoft Technologies created the platform after a delay of more than two years due to licensing issues. A remastered version of The Lost Chapters was released for Xbox 360 as Fable Anniversary in February 2014.

Fable takes place in the fictional nation of Albion. Players assume the role of an orphaned boy who realizes his dream of becoming a Hero. The choices players make in the game affect the perception and reaction to their Hero by the characters of Albion, and change the Hero's appearance to mirror what Good or Evil deeds the Hero has performed. In addition to undertaking quests to learn what happened to the Hero's family, players can engage in optional quests and pursuits such as trading, romance, and theft.

Fable's development utilized more than seventy people. The game's music was composed by Russell Shaw, with the opening title theme written by Oscar-winning composer Danny Elfman. The game's release was widely anticipated, due in part to Lionhead Studios creator Peter Molyneux's enthusiastic hype of the game.

Fable was well-received by critics for the quality of its gameplay and execution, even as they lamented its failure to include many of the features promised by creator Peter Molyneux. The success of Fable spawned two direct sequels: Fable II, released in 2008, and Fable III, released in 2010. The franchise has also expanded to include a number of spinoff titles, including Fable: The Journey and Fable Legends, the latter never released.

Fable is a role-playing game where players control their character from a third person perspective. The main character, known as the Hero, can interact with people and objects as well as battle foes. The goal of Fable is to complete missions known as quests which advance the game's plot. Fable also features optional quests and allows players to pursue actions not directly tied to game completion.

Most quests are undertaken at a central location, known as the Heroes' Guild; required quests are marked with a gold symbol and advance the game's story, while optional quests are coloured silver or bronze and can be completed in any order. Some quests allow players to pick sides and aid either evil characters, such as bandits, or good characters, such as traders and guardsmen. Players can also boast after accepting a quest, wagering some of the quest's reward gold in exchange for a larger return if the player accomplishes their bet, such as sustaining no damage or undertaking the quest naked. Each quest's completion gives players gold, which can be used to buy weapons and items, and renown, which affects the way townspeople react to the Hero. Heroes also earn trophies of their victories, which can be displayed to large groups of townspeople to earn more renown.

In addition to fighting with melee weapons (such as swords and maces) and ranged weapons (longbows and crossbows), Heroes can learn and use spells to augment their abilities, ward off damage, or harm foes. A Hero's spells and attributes can be levelled via experience orbs gained from killing enemies and completing quests. Experience points earned have four categories: General, Strength, Skill, and Will. General points are gained through completion of quests and killing enemies and creatures. Dealing damage by hand, by using a ranged weapon, or by using spells earns more strength, skill, and will points, respectively. The experience the main character gains can be multiplied during combat through the combat multiplier. As the character successfully hits an enemy, his combat multiplier increases. If the character is hit by an enemy, the combat multiplier drops down to the next multiple of five, or zero if below five.

Fable's game world is dotted with towns where recreational activities not related to combat can be undertaken. Enterprising Heroes can buy trade items such as beer kegs or grain sacks and sell them at other towns for profit. Towns are also prime locations to buy clothing, weapons, or other items. Many towns have houses for sale, which the Hero can buy, furnish, or lease to tenants for gold. Heroes may woo and marry men or women in each town, and through sufficient courting engage in sex with them. 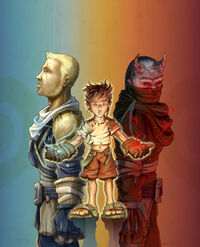 In Fable, a player's Hero has a measure of good or evil alignment based on the Hero's actions. Good deeds award good points, which produce a positive alignment; committing evil acts adds evil points, producing a negative alignment. Killing monsters or saving villagers are acts of good. Killing innocents, breaking laws, or abusing a spouse will accumulate evil points. The alignment affects not only the responses of non-player characters around the Hero, but also the appearance of the Hero himself. A Hero with a strongly positive alignment will feature a halo around his head, butterflies swarming around him and lighter features. An evil Hero emits a red haze from around his legs, draws flies, has glowing red eyes and grows horns.

Other actions besides alignment affect the Hero. Eating too much causes the character to gain weight, while drinking excessively causes Heroes to become sick and vomit. Clothing, which provides defense in combat situations, also changes the Hero's attractiveness or scariness as well as alignment in some cases, and townspeople's reactions to the Hero accordingly. Bright clothing makes the character look more noble to the townspeople, and thus cause them to praise and respect him. Dark clothing causes the character to seem evil or threatening to townspeople and cause them to fear him. Heroes can be further customized via hairstyles, facial hair, and tattoos. The Hero's attributes also affect appearance; high levels of strength increase brawn, high levels of skill increase height, and high-level spells create arcane patterns on the Hero's body to glow.

The game takes place in the land of Albion, which is heavily inspired by medieval England. There is no monarchy or overall ruler, only a loose collection of settlements, villages and towns. Heroes trained by the aptly-named Heroes Guild roam the land, completing quests submitted by the common folk (for either good or ill) as well as bandits and other creatures.

The game centres around the player character, a Hero that is a descendant of the Archons of the Old Kingdom and William Black - the first true Hero.

Fable was the first game developed by Big Blue Box, a satellite studio of Peter Molyneux's Lionhead Studios. Dene and Simon Carter, Big Blue Box's founders, stated that their first project would have to meet several criteria in order to be accepted by game publishers, but that they weren't interested in producing such a generic title. To offset the costs of running a fledgling studio, Molyneux proposed Lionhead 'satellites', where Big Blue Box would receive the technology and support of Lionhead so that Big Blue Box could focus on making the game. After some difficulty in finding a willing publisher, Big Blue Box was contacted by Microsoft who offered a contract.

"We wanted to create a roleplaying game like no other. The world would be a breathtakingly beautiful place filled with waterfalls, mountains, dense forests, populated with compelling and convincing characters with real personality, people who actually reacted to what you did. We wanted to give the player control of a hero who would adapt to the way they played, who would age, become scarred in battle, who could get tattoos, wear dreadlocks and a dress if the player was so inclined. We wanted each and every person who played our game to have a unique experience, to have their own stories to tell. And we called it 'Thingy.'"

With the exception of the title theme, the music in Fable was composed by Russell Shaw, who had previously worked on Molyneux games such as Magic Carpet and Black & White. The job for composing Fable's theme music was given to Danny Elfman. Elfman noted in an interview that Hollywood composers did not typically cross over to video game work, in part because many game developers wanted a synthesized score that sounds like an orchestra, instead of the real thing. At Elfman's insistence, the developers used a small orchestra, which Shaw noted was much more of a challenge than previous projects; "There are more people involved (even without considering the orchestra), and the complexities of any music interactivity are brought to the fore."

Fable: The Lost Chapters was released for Xbox and PC in September 2005. The Lost Chapters includes all content from the original Fable release alongside an expanded storyline, new locations and items. There are also some other minor changes, such as altering Jack of Blades' voice to be deeper and more menacing.

The Lost Chapters content begins one year after Jack of Blades' defeat at the hands of the Hero of Oakvale. Whilst struggling to find a place in the world after the events of the original Fable, the Hero gets a call to return to the Guild once again. From there, the Hero must journey to the Northern Wastes to stop Jack once again.

Fable was generally well-received. The original Xbox version of the game has an aggregate critic score of 85% at both Metacritic and Game Rankings. The game won more than fifty awards.

Though pointing out several flaws in the game such as bland character designs, Marc Saltzman of USAToday.com stated that the game "should satisfy you with its incredible depth, open-ended game play, and a solid story that gets even better about half-way through the adventure." Fable has been praised for its concept of free will and having consequences for the Hero's actions.

The short length of the main plot was criticized by reviewers, but many overlooked this due to the much larger array of side quests available to the player. One of the complaints that arose upon the release of Fable was the fact that it failed to include features that Peter Molyneux had mentioned while the game was still in development.

One of the features that were not included in the game's release was the Hero's ability to have children despite the fact that Molyneux had previously mentioned that the Hero's own children would be significant in the game. Molyneux reacted to these complaints by means of a public apology posted on the official Lionhead forums, on which he said, "If I have mentioned any feature in the past [that], for whatever reason, didn't make it as I described into Fable, I apologize."

The PC and Xbox versions of Fable: The Lost Chapters were also well-received, with slightly lower Metacritic and Game Rankings averages than the original title. Reviewers such as Greg Kasavin of Gamespot noted that the addition of new content helped prevent the game from becoming stale. 1UP.com previewed the game and found that the additive content didn't redefine Fable, but helped bulk up the available quests, addressing the complaint of how short the original Fable was. GamePro and IGN judged The Lost Chapters on PC as surpassing its console predecessor.

In 2005, a Microsoft Game Studios representative stated that Fable would be among the franchises that would appear on the next-generation Xbox 360. Sequels Fable II and Fable III were released in 2008 and 2010, respectively.