"I will return one day, and I will wash away all the filth with your blood. Remember that, Hero."

Lady Elvira Grey is the seductive, voluptuous, but villainous Mayor of Bowerstone. In her youth, Lady Grey was convinced by Jack of Blades to murder her older sister, Amanda, so that she could inherit the position of Mayor. Elvira locked Amanda in the cellar of their childhood house, the Grey House. She later sold half the school library to commision the Manor.

After the Hero defeats the Arena, Lady Grey can be found in the waiting area with Thunder vying against the newest Arena Champion for her attention. She is thoroughly impressed by the Hero's deeds and becomes increasingly infatuated with him, much to the chagrin of Thunder, who had been courting her for some time. If you killed Whisper, she also expresses her disdain for 'family ties' and 'past glories' when Thunder threatens you for killing his sister, calling him an 'old fool'.

There are two intervening quests, Mayor's Invitation and Investigating the Mayor (in Fable TLC and Fable Anniversary only), which you receive around the same time:

Note: There is a glitch in Fable TLC that prevents the Hero from having sex and interacting properly with Lady Grey after marrying her. Lady Grey responds to all flirting and gifts with giggling, does not say a single word and keeps changing directions when walking as if she is stuck in between invisible walls. She will still turn to green when she receives the necessary amount of gifts and flirts, but the player will never be able to get her to ask to go to bed. It seems that this glitch occurs when the Hero does the Investigating the Mayor quest without giving Lady Grey any presents. At the basement of the Grey House Lady Grey will ask the hero to hand over the Amanda's letter, if the hero accepts the offer and beats Thunder at Headsman's Hill, he will directly be able to marry Lady Grey without presents. 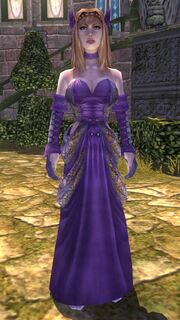 In Fable TLC, you may start both quests, but by completing Mayor's Invitation after opening up the cellar of the Grey House, it is possible to both defeat Thunder to acquire Thunder's Helmet, as well as turn in Investigating the Mayor to become the new mayor of Bowerstone.

It is at this point that:

If you intend to do parts of both quests (to see the most conversation perhaps), they must be done in a specific order. Otherwise the game will glitch, causing the Guild Seal and all Cullis Gates to become non-functional. Specifically, the glitch happens if you perform the following steps:

If you instead choose to expose Lady Grey, or go to Grey House before you have started the Investigating the Mayor quest by speaking to Gethyn, everything will be fine.[1]

At the end of either quest in Fable TLC/Fable Anniversary, the Hero will become Mayor of Bowerstone and have access to Lady Grey's chamber in Bowerstone Manor, where a Silver Key can be found under her bed. A Silver Key chest is also accessible in the chamber to obtain the Katana Hiryu.

Note: If playing the original Fable, you must complete Mayor's Invitation in order to gain access to Bowerstone Manor, as the Investigating the Mayor quest exists only in Fable TLC.

The Headsman's Hill area is only accessible through a fight with Thunder over Lady Grey during the Mayor's Invitation quest, where you will find a Silver Key and a Demon Door (see below).

In order to receive all the Silver Keys (without cheating), the player must complete all the mini-quests in the Mayor's Invitation until the fight with Thunder. While fighting him, you will fall off a cliff to Headsman's Hill. Fish out the Silver Key after the fight, then you can complete either quest. However, there is also an exploit available in both Fable and Fable TLC to get Unlimited Silver Keys. This is not possible in Fable Anniversary as the save system has been revised.

In Fable TLC and Fable Anniversary, the Hero of Oakvale is given the choice between publicizing her crime or destroying the evidence.

While the Hero of Oakvale can marry her, canonically, it is revealed in Fable II, that Lady Grey was convicted of being a witch, murdered by an angry mob, dismembered, and had her body parts spread across Albion. Her head was placed in a tomb she had named after herself for when she died, her lower body was placed in a cave in Rookridge (the Hobbe Cave), and her upper body was deposited next to Twinblade's coffin in his tomb.

There are no records of this happening in Fable, Fable TLC or Fable Anniverary however, if the events of the Hero becoming mayor are accurate, this most likely happened in the other town that Lady Grey fled to, some time after she left Bowerstone for good.

Lady Grey returns in Fable II through a quest called Love Hurts. Her appearance and personality change drastically from Fable to Fable II due to her resurrection. She is more capable of love than she was in life, on account of the nature of her revival, and seems to have lost her manipulative, power hungry edge. She also talks of having to resew herself, which proves the resurrection didn't fully restore her, but only revived her corpse.

This quest becomes available after reaching Bloodstone. In this quest, Victor, the gravekeeper of the Bowerstone Cemetery, has an obsession with Lady Grey and wants to reanimate her corpse. The Hero will be asked to collect three of Lady Grey's body parts. Once you have given him the pieces of her dismembered body, he uses a spell to reanimate her, and make her fall in love with the first person she sees. The Hero can then choose to let the lonely, love-struck gravekeeper marry her, or steal his bride-to-be for her/himself.

If you choose to marry Lady Grey, make sure you have a 5-star ring on hand. If you don't have a 5-star ring and you wish to marry her, you can run out and buy one and she will wander around Bowerstone Cemetery, or you can tell her to follow you to a jewellery store and propose to her there. The ring must be given to her quickly or you cannot marry her and she can no longer be found in the Fable World.

Lady Grey becomes afraid of some Evil characters and, even though she is in love with you, proceeds to run on sight, making it very difficult to marry her. If she does run, there are a couple solutions:

It is advised not to start the Love Hurts quest until after completion of the main storyline due to a significant number of glitches associated with the quest reward, and effects on the playability of the end storyline.

Unfortunately, this particular quest contains a major bug that often prevents players from finishing the final part of the quest, because the grave keeper will not actually respond when you return with the head. This has to do with the Hero's speed as he approaches the gravekeeper (sometimes speed will not make a difference and the glitch will not change):