Elise is the childhood sweetheart of the male Hero of Brightwall and is the supporting character of the quest Life in the Castle. Introduced early on, she is the one who teaches the player how to use the touch mechanic. She was first revealed at Gamescom. [1] There is a male character named Elliot who has the same role as Elise if the player chooses a female Hero at the start of the game.

At the very beginning of the game, Elise tells the Hero of rumors that a factory worker was executed and the staff at the castle are uneasy. After going hand in hand to the kitchen where the Hero gives a speech, she will leave while the Hero trains with Walter. During the training session, she bursts in, informing the Hero and Walter of protesters outside the castle. After Walter leaves to talk to King Logan, she convinced the Hero to follow him and spy on the conversation; they do, and are shocked when Logan decides to kill the leaders of the protesters. They are both then caught, and taken to the throne room. Here, the Hero must choose between executing Elise or executing the leaders of the protest. Elise will insist that the Hero choose her. Even if you choose to keep her alive, you will leave the castle without her. When the Hero asks about her, Walter simply says she can look after herself.

Later on in the game, you will receive the quest "Kidnapped" where a character named Laszlo, whom the Hero met earlier at the castle, will ask you to help rescue his fiancée, then as the quest continues, if the Hero chose to spare her at the start of the game, the Hero will find Elise. If Elise is dead when you perform this quest, she will be replaced by a woman named Geraldine, but the quest is otherwise unchanged. As they progress through a cave, Elise tells him about how guilty she felt for letting the ringleaders die and therefore her living, and how she loves Laszlo and the Hero. After rescuing her, he will have the choice of telling her to be his, for her to go to Laszlo or stay silent. However, if you tell Elise to return to Laszlo, this gives you +100 good morality; if you keep Elise for yourself, this gives you -100 morality, and if you offer "no comment" your morality remains unchanged. This quest becomes unavailable after leaving for Aurora during Traitors.

If you choose to tell her to come back to you, she will tell Laszlo she loves him, but after three in-game days, she appears outside the orphanage/brothel, in the quest "A Lost Romance", in which you must marry her. It doesn't affect on gameplay, except that she will be your wife. If you choose either of the other options, she will marry Laszlo, and "A Lost Romance" will not activate. 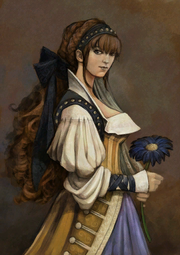