Dragons were once mighty creatures that, according to the Snowspire Oracle, dominated the skies of Albion in the age before the rise of man.  Many once lived in Albion, but with the rise of the Old Kingdom, huntsmen killed them for sport. The final Dragons to be seen in mainland Albion were the mounts of the legendary Dragonknights, led by the great Hero known as Holdr. The surviving Dragons fled to the mountains and the Northern Wastes, and over time they grew less powerful, and their fiery breath less dangerous. Without man, they had no natural enemies.

By the end of the Age of Heroes, Dragons were a rarity, a fable spoken of only in textbooks and stories. However, not all Dragons were dead. During the Age of Industry, a Dragon named Percival helped the Hero of Brightwall in his attempts to overthrow the tyrannical Empress and destroy the Darkness in Samarkand, indicating that at least one Dragon was still alive in that eastern continent.

At the end of Fable: The Lost Chapters, Jack of Blades took the form of a dragon in his second battle against the Hero of Oakvale at Archon's Folly at the end of the final quest.

The Final Boss for the original Fable on Xbox was meant to be a Dragon called Trogdor that would be found in the town of Hook Coast or behind a Demon Door in Lookout Point. This was changed to Jack of Blades having a Dragon form instead for Fable: The Lost Chapters. 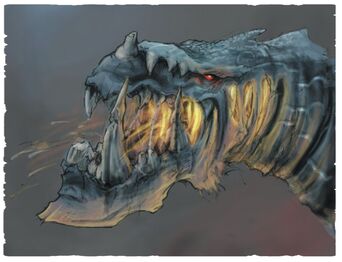 Combat with a Dragon.

Dragon spawned with mods for the summon spell.

First model of a dragon from Project Ego.

Second Dragon in the original Fable with animations. 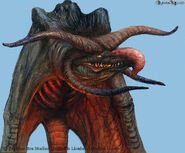 Concept Art for a Dragon in Fable (Xbox).
Community content is available under CC-BY-SA unless otherwise noted.
Advertisement