The Dog is a supporting character in Fable III that accompanies the Hero of Brightwall.

His primary intended purpose is to be a way for the player to develop and hold a deeper emotional link to Albion. He is first introduced when Jasper pulls away the Hero's bedsheets at the beginning of the game. Unlike his counterpart in Fable II, there are no collars available for him to wear; he can be renamed in the Sanctuary while he sleeps in his basket. The dog's breed can be changed with the use of elixirs via downloadable content. The Hero can play fetch with the dog, pet the dog in a very affectionate manner, or tell the dog off.

The Hero and the Dog are supposed to have a bond similar to the one the Fable II pair holds, but after his initial appearance, the dog's role in Fable III is markedly less pronounced than that of the Fable II dog. If the Hero still wishes to find buried treasures, however, or complete Friendship Fetch quests, then the dog is still useful.

Like in Fable II, there are still books that the player can find or purchase that will advance the dog's abilities. In Fable III, you must first interact with your dog and then must select the book from the contextual D-Pad commands in the lower left-hand corner of the screen. You are not required to use the books in sequential order; using a level 4 training book by itself will yield the same end result as using a level 2, level 3, and level 4 in order.

The dog still has a Treasure Finding and Aggressiveness stat, similar to Fable II. However, instead of the dog tricks and dog trick training manuals that its predecessor used, this dog has a new stat called "Charisma". This stat, in addition to streamlining the dog's tricks, has an effect on how powerful the Hero's social interactions are.

Your dog in bed with the Hero of Brightwall.

Your dog with Jasper 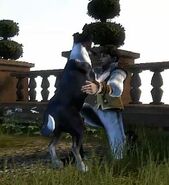 Your dog with Elliot. 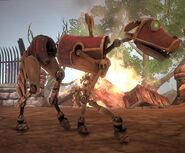