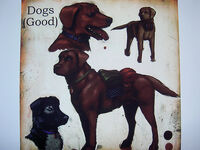 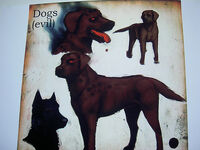 The dog is intended to be an integral part of Fable II, with the goal of strengthening the player's emotional bond with Albion. Mechanically, the dog's function is helping the Hero find treasure chests, buried caches, and certain quest objectives.

Relation to the Hero[]

The dog is found in the very beginning of Fable II, while the player is gathering gold coins to purchase the Music Box from Murgo the Trader in Bowerstone. Rose and the Hero save the dog from a bully, and the dog repays them by finding an arrest warrant. Later, the dog appears at their ramshackle hut, now attached to the siblings. When the player is shot and thrown out the window of Fairfax Castle, the dog finds him/her and helps in the Hero's recuperation under the watchful eye of Theresa. The dog will then remain with the player for the duration of the game, assisting in combat and helping the player find treasure and all important dig spots. In addition, should the player knock down an enemy, the dog will rush forward and begin to attack it, resulting in damage and death.

There are books all over Albion that can be dug up, found in chests or purchased at a book store that allow the player to teach the dog new tricks, and there are also books that will improve Dog's treasure hunting abilities or combat damage. These books can be used by selecting them in the Inventory, under Books and Documents, or by pressing the corresponding contextual command button when looking at the dog. You are not required to use the books in sequential order; using a Three-Star Dogs of War by itself will yield the same end result as using a One-Star, Two-Star, and Three-Star in order.

As the game progresses and the Hero's alignment shifts toward good or evil, Dog's appearance will change. In the vanilla game, a dog aligned with good would appear happy, and it would look similar to a yellow labrador. A dog aligned with evil however would be aggressive, and its paws and tail would be jet black, similar to a black lab but with glowing red eyes. However, as Downloadable Content became available this changed, depending on the type of dog the player has. The appearance of the dog depends on its alignment plus its breed. Also, a good dog will be praised by townsfolk and children will flock to pet him, whereas an evil dog will be kicked and shooed away by townspeople, and will growl and bark at the slightest provocation.

Should the hero stay neutral the dog will have the same appearance as it did at the start of the story, and townspeople will usually praise it just as they would if it were aligned with good.

The player first meets the dog in Childhood. The dog is being attacked by a bully and the player saves it. Later, it appears by you and your sister's 'house' at which point your sister reluctantly gives in and decides to keep it. After the death of your sister it continues to live with you in the Gypsy Camp and will always be by your side, except for when you're in The Crucible or The Spire, when it waits with Hammer. At the end of the story, Lucien appears and takes Hammer, Garth and Reaver, leaving just the Hero, the dog, and Lucien. Lucien attempts to shoot the Hero, but the dog heroically jumps in the way and takes the shot, saving the Hero from that bullet.

After defeating Lucien, you have a choice to resurrect your dog (along with your family) by choosing Love at the end of Retribution. If, however, you choose either Sacrifice or Wealth and you have quests left that require digging, you will be, with difficulty able to complete them. Instead of your dog leading you to a dig spot, a glowing trail will, and you will have to dig yourself.

If you did not do the Demon Door who has an interest in dog tricks, your dog will appear as a ghost and stay at the demon door until you finish unlocking the door. In addition, upon entering said door, your dog will appear as a ghost if you select a "dog" action from the expressions screen, and will do so every time you return into the Demon Door, the location being befittingly named "Memory Lane".

It is possible to get one's fallen dog back via the Cheet-ur's crypt on Knothole Island by sacrificing a human for no cost (no alignment loss or gold).

The DLC pack See the Future features the ability to change the players dog to a new breed. This is achieved through purchasing potions from Murgo after installing the content.

Using the DLC, the player can transform their dog into a:

The Hero of Bowerstone with his Dog