Demon Doors are magical doors found all over Albion. They were created long ago by the Old Kingdom and often conceal treasures inside them. To enter the door and obtain the treasure, you must first complete a challenge set by the door itself - this can be anything from answering a riddle, to battling guardians. Inside every door, along with the treasure, is a unique area of land.

Demon Doors are among many ancient oddities, like the Gargoyles and Expression Statues, but unlike the latter, actually have separate and unique personalities. Some are known to be rather simplistic in intelligence, speaking with poor grammatical structure, while others consider themselves sophisticates and playwrights. Whether they were created with these personalities or merely developed them in the years since their masters left is unknown. Some Demon Doors even said they were people in the past.

In Fable and the The Lost Chapters, the Demon Doors had the appearance of a bald, though strong looking man with an unkempt beard. In Fable II and Fable III, they have a more intelligent appearance, with carefully groomed beards and a full head of hair.

Apparently, the Demon Doors are artificially made, as the Oakfield Door holds Homestead, supposedly made by powerful Will users, while the Fairfax Garden’s Door claims to have been made by the first Archon.

As relics of the Old Kingdom the Demon Doors seem to be incredibly lasting. The Rookridge Demon Door claims to have been around for millennia, and again, the Fairfax and the Oakfiled Door have supposedly been made in Old Kingdom by the First Archon and a group of Will users respectively. Additionally, the name of the Old Kingdom Spring located in the Barrow Fields Door also implies that it goes back to such time.

Every Demon Door seems to have some requirements for them to open, even if against their will, such as the Brightwood Door who is extremely reluctant to do so. It requests cheese, believing there to be a great cheese famine occurring, and then requiring the Hero to dress ridiculously, believing no self-respecting hero to do so. The only Doors to flat out refuse to open are Fairfax Gardens Door, the Lookout Point Door (both of which are refered to be the first Demon Door ever made) and the Lychfield Graveyard’s Demon Door. However, doubtlessly the Brightwood Demon Door did whatever it could to prevent being opened.

Oddly this same Demon Door laments having once great treasures (the reward is male prostitutes outfit held in a cemetery), one, this means it is conscious of the treasures inside, and two, that somehow this same Demon Door had once been looted previously. The closure of Demon Doors has not really been addressed, while most of the Demon Doors seem remain open, there are indications that they have the ability to close back if desired. This is demonstrated by: the aforementioned Brightwood Door, the Lookout Point Primal Demon Door, which closes on exiting, the Witchwood Stones’s Demon Door, which had to be opened before for the Archaeologist to gain entry, the Oakfield Door, which has been inhabited by many heroes before (including the Hero of Oakvale) and possibly the Wraithmarsh Demon Door, which is in the same location as the Barrow Fields Demon Door, and must therefore have closed at some point. The Wraithmarsh and Oakvale doors however have very different personalities and lead to completely different places.

When the player finally does open the Fairfax Door, it makes a comment about the other doors, saying they're probably having a great time without him, and decides to join them, if only to ruin their fun, unwittingly opening for the Hero. This means that a Door's consciousness goes to the same place where all the others go after opening, most likely the Demon Door Retirement Home.

Purpose of the Demon Doors[]

While the most frequent purpose served by the Demon Doors are the safeguarding of treasures, with some of them containing Unique weaponry from the Old Kingdom, this is not the only intend they seem to have been made for.

Demon Doors have also served as residence for those who gain entry, the Homestead is explicitly describe to have been created for this exact purpose, with the The Hammerthyst’s presence in it being merely incidental. Other Demon Doors, such as the The Secret Haven, also indicate being inhabited in the past. But it’s unknown if that was their original purpose as well.

Another function served by the Demon Doors are as acess points that control the passage to an adjacent location, such as the ones in Lychfield and Gibbet Woods. Effectly reducing them to the role of a simple gate, albeit a very effective one.

Some Demon Doors, like the ones in the Bowerstone Cemetery and the Darkwood Bordello are home to ancient and abandoned ruins, that while still housing treasure, could have served some unknown role back when they were constructed. If so, Demon Doors could have also served as entryways into important locations, such as temples and gardens.

It’s also possible for Demon Doors to be repurposed to a different function. The most notable example of such is when the Archeologist uses the Witchwood Stones Demon Door as a hideout to escape Jack of Blades. But others Demon Doors with modern looking objects, lesser treasure, relatively easy challenges and located in a commonly frequented area, like the Guild of Heroes Door, could have had their original treasures taken by previous openers and their interior redesigned for whatever new purpose desired.

However the change of purpose could come from the Demon Door itself. Demon Doors like the Primal Demon Door, have remained faithful to the duty designed to them on their creation. Some Demon Doors however seem to have changed their allegiance after the long time since the fall of their former masters from the Old Kingdom. Many Demon Doors make frivolous, if not downright idiotioc request from those that try to open it seemly desiring only their own amusement due to their limeted physical capabilities, offering their contents as “rewards”. The Lychfield Graveyard seems to be an strange example of this, as it claims to open only for Nostro, who it calls as it’s “Guardian” besides him certainly not being around during the time of it’s creation, showing a complete transference of loyalty on the Door’s part. Unless of course, Scythe had a hand in such “nomination”. 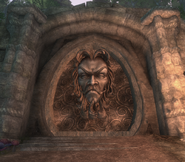