The Fable Wiki
Register
Don't have an account?
Sign In
Advertisement
in: Spoilers, Fable: The Journey Locations

Deepgorge is a part of northern Albion that consists of a massive series of canyons above and beside the Ironwash River. To the east lie Echo Hills and the Deepgorge Tunnels, while in the west the gorge opens out onto Kraken's Jaw beach. The seaward end of the gorge is spanned by Reaver's Reach.

Although lacking the tranquillity of the nearby Echo Hills and Shalefields, Deepgorge is an important part of northern Albion. The multitude of mines and factories indicate that the area is rich in natural resources, and the town of Bastion is the latest addition to Albion's industrial expansion. The different levels and mines in the gorge are connected by a series of lifts capable of carrying all manner of goods, resources, and vehicles.

Being a center of industry in northern Albion, Deepgorge, its mines, and Bastion are major sites for Reaver Industries. Theresa even mentions that Reaver may have been visiting Bastion personally before the Corruptor's power grew, leaving Deepgorge behind and forcing the miners and workers to fend for themselves.

Bastion is a sizeable industrial town that hugs Deepgorge's massive canyon walls. The town was constructed due to the abundance of natural resources in the area, and serves as a control centre for the region's mining works and construction, evident by the presence of multiple mines and factories. 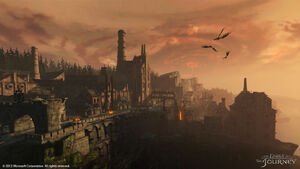 Bastion under the Harbinger's attack 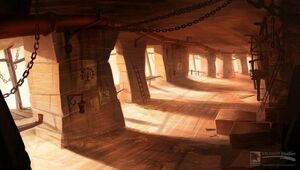 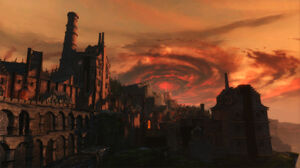 Gabriel came upon Deepgorge during his journey to get Theresa back to the Spire to restore her power and fight off the Corruption. Passing through on his way to the final destination at Kraken's Jaw, Gabriel had to fight his way through the occupied town of Bastion, avenging the murdered factory workers who had all been killed by the harbingers. 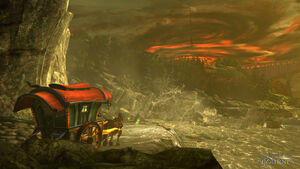