Darkwood Marshes is an area of Darkwood in Fable, Fable: The Lost Chapters, and Fable Anniversary. It lies beyond the Darkwood Entrance, and is the second region of Darkwood visited when journeying south from Greatwood. It is home to bandits, Hobbes, and the occasional balverine. The lower marshes contain dangerous fungi plants that will rattle and explode, releasing poisonous spores, if anything approaches. They can be safely detonated from a distance with a bow or Will spells (ideally, the Lightning spell).

The marshes of Darkwood are feared by many a trader.

There is a Demon Door here, which contains the entire Dark Will User's Outfit. To gain access, the Hero must defeat the door's guardians – four waves of increasingly powerful hobbes.

Two unused quests known as "Battle Good" and "Battle Evil" suggests that the Hero of Oakvale would have the option to choose between fighting along side Bowerstone Sheriffs or Bandit Lieutenants in the Darkwood Marshes as a random event. 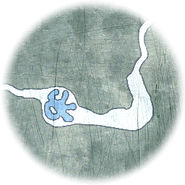