Darkwood Lake is an area of Darkwood in Fable, Fable: The Lost Chapters, and Fable Anniversary. When travelling south from Greatwood, it is the last region traversed before reaching the Darkwood Camp. Bandits and hobbes can be found infesting the "lake", which is really just a morass of stagnant pools.

There is a 15-key silver chest here which contains the legendary Arken's Crossbow. There is also a tall, glowing standing stone near the exit which, upon inspection, has something lodged in a hole at the top. Aiming and firing an arrow at the hole will dislodge a silver key.

In Fable: The Lost Chapters and Fable Anniversary, the entrance to the famous Darkwood Bordello can be found here. There is also a strange altar depicting a summoner which plays an important part in the quest Darkwood Disturbance.

The lake is said to be infested with insects. 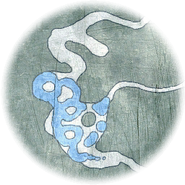