Darkwood Camp is a small trader camp located in Darkwood in Fable, Fable: The Lost Chapters, and Fable Anniversary.

The camp serves as a relatively safe haven in the midst of the dangerous Darkwood. It has three traders and a pub Game Master, who offers games of blackjack. The first trader deals with weapons, the second armour and clothing, and the third deals with items like food and gems. This is the only non-hostile place in Darkwood (besides the Darkwood Bordello in TLC), but beyond the safety of the camp lies the path to the Chapel of Skorm. During Trader Escort, the traders following the Hero will take a short break here, and have their health bars automatically refilled.

A safe haven among the perilous woods, where the bravest traders have set up stalls serving passing adventurers.

The camp is inhabited by a gamesmaster, Rewster and three traders. The names of the traders interchange between: 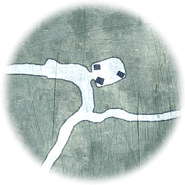