The Darkwood Bordello is a location in Fable: The Lost Chapters and Fable Anniversary. Although located in the dangerous Darkwood area, the Bordello itself is a safe haven where there are no hostile creatures. Here, the Hero could buy sexual services from various prostitutes, often with hilarious outcomes. The building's purpose may be changed by doing the quest in which the player may start running the brothel or give the girls freedom and change it into a shelter for homeless women. You’ll find the passage to Darkwood Bordello in Darkwood Lake. There you will be welcomed by Madame Minzche, who will tell you about the troublesome owner of the place. You’ll have to find the Bordello Deeds in order to get rid of him.

An oasis of love, luxury, and depravity in the middle of the dangerous forests of Darkwood.

Grope is the owner of the Darkwood Bordello before the Hero comes to the secluded, safe area in Darkwood. The Hero is told that he is an unfair master to the female residents. However, he can be usurped from power if the Hero has the Bordello Deeds, the location of which is known only to Grope.

Grope will disclose the whereabouts of the Deeds to the Hero if a) the Hero gets him drunk by giving him beers, in which case Grope will go upstairs to sleep it off, or b) the Hero clothes himself in a dress and wears the Redhead Wig (which can be obtained from a dresser on the second floor of the Bordello), then proceeds to sleep with Grope. In both scenarios, Grope will divulge the Deeds' location whilst muttering in his sleep.

The Deeds can be dug up from under an old tree down by the lake. Once the Hero gains the Rights to the Bordello they are presented with a choice:

The Demon Door in the Darkwood Bordello area demands that you must have had intercourse at least ten times. He will open once he knows of the Hero's sexual prowess, allowing the Hero to get the Pimp's Hat. Right before opening, the Demon Door sadly asks, "What's it like?" This is an allusion to a skit from Monty Python's Flying Circus. 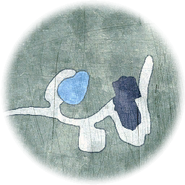