"The sooner we put this forest behind us, the better. There are unnatural things out there."

Darkwood is a dark, twisted forest region that encompasses much of southern Albion, between Greatwood and Barrow Fields, in Fable and Fable: The Lost Chapters. It is infested with nymphs, balverines, hobbes, and trolls, as well as many bandit raiders ready to spring on an unwary traveller. Traders must pass through this area to get from Oakvale to Greatwood, and thus Bowerstone, and back. There are just two safe sanctuaries in the entire wood, a small merchant camp and the famous Darkwood Bordello (Fable: The Lost Chapters only). Also, perhaps less safe, and more macabre is the Chapel of Skorm where a slightly more evil hero might take an unwitting follower to sacrifice to Skorm.

By the events of Fable II, 500 years later, Darkwood has substantially expanded. It has taken over the area of the destroyed village of Oakvale, and has grown far beyond it, reaching all the way to Bloodstone (where Twinblade's Camp was located). It surrounds Bloodstone on three sides, effectively isolating it from the rest of Albion, save by sea. The area is called Wraithmarsh and contains many of the same characteristics as Darkwood. 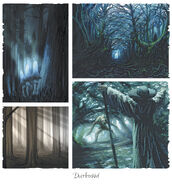