"It speaks to us still. Darkness incarnate. We know now we can never escape it."

— Found in a journal, above the entrance to Shadelight

Darkness Incarnate is a quest in Fable III that begins once the Hero and Walter arrive at the Unknown Shore, in the Auroran continent.

After boarding the Reaver Industries paddle steamer in Bowerstone Industrial, the Hero, Walter, and Ben Finn set sail for Aurora, where Major Swift said they could find allies for the revolution. However, during the crossing, the ship comes under fire from one of Logan's vessels, and is destroyed.

This quest begins with Walter finding the Hero regaining consciousness after passing out during a shipwreck. Though Walter and the Hero survived relatively unharmed, Ben Finn is nowhere to be found. Walter claims that Ben is a great swimmer, and probably made his way to another part of the shore safely.

Note that until you leave Aurora, your Sanctuary will only have partial functionality. Jasper has disappeared, and the Map Table, Treasury and Live rooms will be locked.

After a short look around, Walter decides that the only way to move further inland is to make their way through an ominous cave. Before leaving the beach, however, go past the remains of the ship behind you to find a chest tucked behind some rocks at the foot of the cliff. Afterwards, head back to Walter and follow him into the cave. A short way into the cave the pair stumble across a large chamber with a force field at the bottom, guarding a spiral staircase leading deeper into the cave (similar to the entrance of the Temple of Shadows in Fable II). 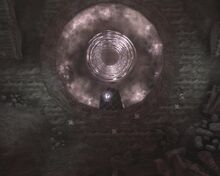 Before descending to the level with the force field, head around to the left just before the steps to reach another chest.

When you reach the bottom of the steps, Walter points out some other people who must have got stuck there as well. While searching the skeletons surrounding the force field, the Hero finds a notebook near one of the skeletons. It reads:

"It speaks to us still. Darkness Incarnate. We know now we can never escape it."

Walter comments on the note and finds a journal full of what he describes as 'gobbledygook'. After reading a phrase from the book, the field disappears, and the Hero and Walter continue down the staircase, into Shadelight. As they descend, the force field reforms above them, blocking the way back. Meanwhile, the dog finds a torch, which Walter promptly lights.

Note that at this point, you are able to head back to the entrance of Shadelight and return to an earlier point in the game. This will put you back in Bowerstone Industrial at the point where you start to follow Ben Finn out of the Resistance HQ to the docks.

As they continue to explore, it becomes obvious that the cave once served as some sort of temple, though, as Walter remarks, it is difficult to believe that someone could worship in such a dark, eerie place. Continue along the corridor to the chamber ahead. Walter will stop at the edge of a deep chasm, and remark that there may be a way to extend a bridge if you can reach the lever on the other side. Drop down to the lower level that Walter points out for you, then make your way around to the lever. Pull it, and the bridge will extend, although not before some of the cave structure collapses into the chasm. As Walter arrives, he remarks on a strange sound, and then proceeds up the steps to another force field. "Walter the Scholar" dispels it, with, as he points out, an increasing sense of trepidation.

After passing through the force field, the Hero and Walter are assaulted by shadows accompanied by an ominous voice claiming that a great darkness will sweep over the land. Walter is terrified by the shadows and the voice, and begins to lose his composure. Kill the shadows, and the voice will remark that you are both tainted, with a stain that will never come out. Continue along the corridor behind Walter; he begins to berate the author of the journal, and becomes increasingly agitated. When he feels a cold breeze coming from a doorway, he hastily runs to it. The breeze picks up, which puts out the torch that Walter was carrying (the group's only source of light).

Walter panics and attempts to relight the torch several times before he finally restarts the blaze. He turns around, only to see an appalling creature inches from his face. It begins speaking (in the same voice that had accompanied the shadows) and he waves the torch at it blindly. This encounter deeply disturbs Walter, and he begins running through the temple, desperately looking for an exit.

As the two enter another chamber, they are again attacked by shadows. The Crawler tortures the pair, telling them everything they don't want to hear, including the fact that Theresa knew about the Crawler, and could have warned the Hero about the dangers of the temple. After the last of the shadows have been defeated, Walter, driven to the brink of insanity by the voice, throws the torch at the Crawler. The Crawler writhes in pain until it ceases to move, and disappears.

Once the Crawler disappears, Walter calms down a bit. He apologises for his breakdown, and urges the Hero to hurry so they can leave the temple. The duo exit the chamber and enter a dimly lit cavern with streams of a dark substances flowing downward into crevices throughout the room. They come to a ledge where the Hero must jump down to ensure the fall is safe for Walter. The Hero tells Walter that it is safe and Walter begins preparing himself for the jump.

Just as he is ready to jump, a sound is heard behind him. He turns and cowers before the unseen enemy, then disappears. The Hero sees a flash of purple fire, then yells for Walter, but receives no answer.

The Hero is forced to enter another part of the temple to try and rescue Walter from the darkness. After fighting off dozens of shadows (all the while being taunted by the Crawler), the passages lead to a large chamber lined by a number of statues. In the back of the room, Walter is almost completely covered by darkness, which renders him unable to move or talk.

The Crawler summons several more shadows, and begins animating the bird-like statues around the room. After the Hero defeats the shadows and the minions, the darkness flows into one of the enormous statues surrounding Walter. This Sentinel attacks the Hero, summoning shadows as it does so.

Defeating the Sentinel causes the darkness around Walter to dissipate. Though he is able to move once again, Walter's eyes are covered in darkness and he is blind. The Hero leads Walter out of the cave while the Crawler whispers disturbing statements such as, "Ah, and the eyes are forever gone."

Female Hero finding the notebook on Darkness Incarnate
Add a photo to this gallery
Retrieved from "https://fable.fandom.com/wiki/Darkness_Incarnate?oldid=142816"
Community content is available under CC-BY-SA unless otherwise noted.