Commander Milton is the warden of Ravenscar Keep and the main supporting character of the Fable III DLC Traitor's Keep.

The Hero and Commander Milton first meet when Milton sails to Bowerstone in pursuit of an escaped prisoner who attempts to assassinate the Hero. He then asks the Hero to accompany him back to Ravenscar Keep. The Hero and Milton arrive at the island to find that a riot has broken out in the prison. After quelling the rebellion at Ravenscar Keep, they both travel to Clockwork Island and the Godwin Estate to track down Professor Faraday and Mary Godwin (aka Witchcraft Mary). After they are both captured or killed and the Commander asks the Hero to meet him again, he claims that General Turner has been hiding in the prison's secret passageways and assaulted him while kidnapping Hobson.

When the Hero attempts to save Hobson, it is revealed that General Turner had been dead for six months. Inspired by Turner's revolutionary philosophy of having a government being run by the people with the military supervising, Commander Milton tries to make Turner's philosophy into reality. Sending the assassin and all previous events were masterminded by the commander himself. When the Hero comes to free Hobson they are shocked and restrained in a machine similar to the one found in the Godwin Estate made by Witchcraft Mary. Using this invention, he becomes a doppelganger of the Hero. During their time together Commander Milton had observed the Hero's fighting style and other mannerisms allowing him to become the monarch with no suspicion. After attacking the Hero's dog, the Hero becomes angry, breaks free from their restraints and fights Commander Milton. 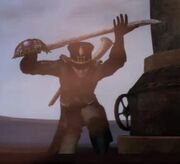 During the fight he tells the Hero he has modified the machine to increase his power that was taken away from the Hero so a stalemate could not follow as both would have equal strength and would continue to fight for all eternity. He also questions the Hero how they are different from any other person and how just because the King/Queen is a Hero that that makes them the ruler of Albion when the same blood runs through everyone and that Heroes are just freaks of nature. He is defeated and warns the Hero with his last breath that the people of Albion will eventually rise up and decide for themselves how they should be ruled.

Retrieved from "https://fable.fandom.com/wiki/Commander_Milton?oldid=130402"
Community content is available under CC-BY-SA unless otherwise noted.