The City of Aurora is the only city located in Aurora in Fable III. It is starkly different from settlements in Albion, being located in the desert. The buildings appear to be made of sandstone, the people are dark skinned and the flora and fauna are unfamiliar and strange. It is the only known civilization on the continent, the result of the Crawler's desolation of the region.

Aurora was once a thriving city until The Crawler attacked it, leaving only a few survivors. After that, it has become a wasteland where the people live in constant fear of the Crawler and its forces returning.

The Status of Aurora[]

There is an unused salt mine under the Auroran desert, the entrance to which is located in the hillside behind the city. Once the Hero becomes the Monarch of Albion, they are offered a choice, whether to rebuild Aurora to its original beauty and fulfil the promise to Kalin, or to rebuild Aurora as a mining town, forcing the Aurorans to work there. Regardless of the choice, Reaver Industries takes on the project of the rebuilding.

If the city is rebuilt as a free state and equal part of Albion, the area is dramatically cleaned up. Birds can be seen flying overhead and the area is bathed in perpetual sunshine, except during the night, when the sky is clear and bright. Reaver refers to the city as 'a light blooming in the darkness'.

If the city is rebuilt as a mining colony, the area is filled with industrial buildings and structures. The air quality suffers for it, and a stagnant smog hovers over the city. Cart tracks criss-cross the skyline leading from the mine to the docks. Reaver refers to the city as 'a gem glowing in the darkness'.

Once the city has become part of Albion, the region is patrolled by the guards of the Royal Army. There are regular patrols between the town square, the docks, and the mine entrance. 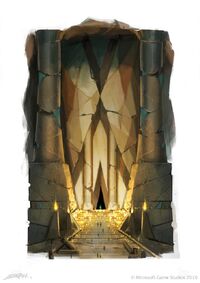 A large temple sits near the centre of the city, however, since the desolation it has become run down and lost many artefacts used by the people. The Hero is sent to embark on quests (Temple's Treasure and A Relic of Ages Past) in the attempt to retrieve some of the missing artefacts.

At the foot of the temple steps, the town square holds the city's merchant shops and stalls. Sketchy Tattoos, Honest Omar's, Robes Are Us and Styles of Aurora line the side towards the docks. Delectable Delights food stall is near the archway, at Flotsam's Jetsam sits at the bottom of the hill which leads to the mine entrance. Misca Tonics and The Armoury are to the left of the temple steps, as you look towards the top. The Curiosity Shop and Vegetables of Aurora stand either side of the central shrine, along with two blacksmith forges. Lute Hero can also be taken from a sign near the food stall, and another behind the pawnbroker.

Turn left out of the town square and you will reach the city docks. If the mine is open, cranes can be seen preparing to load goods onto ships from numerous wooden piers. From the pier on the right, a ship waits to transport passengers to Bowerstone. If the mine is closed, two small stone jetties protrude into the glistening bay. Passage to Bowerstone can be obtained from the ship captain standing on the left jetty. 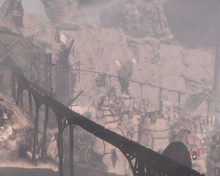 Head up the hill from the town square, beside the pawnbroker's, and you will reach the entrance to the old salt mine. If Aurora is an equal and free part of Albion, the mine entrance will be blocked up and a large shrine will stand next to it. If Aurora is being mined for resources, the mine entrance will be surrounded by machinery. The interior of the mine will become available as a dungeon for the Hero to explore and retrieve a random legendary weapon. Than, the mine supervisor, will offer a repeatable quest to find 'volunteers' to work in the mines.

Head out of the town square and you will soon see the back of a large statue standing at the top of the hill in the distance. This is the same structure you noticed when escaping from Shadelight, and when you were brought into the city. Head up the hill to reach the city gates, located within the middle of the statue. Beyond these lies Shifting Sands.

A Demon Door is located off to the left of the track that climbs to the city gates.

Concept Art of the City of Aurora