"In Darkwood, you will find the Chapel of Skorm. Please the deities there, and they will let evil into your soul..."

The Chapel of Skorm is a location in Fable, Fable: The Lost Chapters and Fable Anniversary. It is a deadly shrine dedicated to the devil of Albion, Skorm. Here, evil Heroes donate other people's blood to the worshipers of Skorm to receive the gifts of evil. This is also the place where you can obtain the ultimate bow: Skorm's Bow.

Skorm himself is said to listen to the beseechings of those here.

The Chapel of Skorm can be reached by taking the second path away from the Darkwood Camp. When travelling to the Chapel of Skorm, regardless of the time of day, you should notice the sky turn a blood red. This is a clear sign showing that you're going the right way.

At the Chapel of Skorm you can sacrifice followers to Skorm to receive his gifts. You can obtain various gifts, such as the title Necromancer and 4-10 years age reduction, although the most treasured and valued gift is the infamous Skorm's Bow, the strongest bow in Fable. You will also get Evil Points based on the time at which the sacrifices took place.

The latest speedrunning strategy - which has been tested using cheat engine and debug - is sacrificing the Twinblade's Camp henchman at 12am on a Sunday.

Wait until a Saturday (Every day that is a multiple of 7 is a Sunday, so day 6, 13, 20, 27, etc. are Saturdays), hire the henchman in Twinblade's Camp (make sure he has max health when the time comes), and use a moonfish when you get to the Temple. Every in-game hour the henchman will be paid 7.5 seconds before the top of the hour, so when the payment indicates that it's nearly 12am, wait three (3) seconds and then start the dialogue with the acolyte. Skip all the dialogue as fast as you can. NOTE: The cutscene showing the victim floating onto the alter doesn't matter because the game has decided whether to give you Skorm's Bow immediately before it even begins playing.

There is also a quest related to this place of the same name.

In Fable II, it is learned that the Chapel of Skorm was destroyed and was later replaced by the Temple of Shadows. 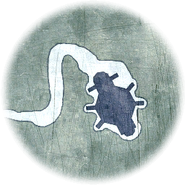