According to the Guildmaster, the Chamber of Fate is the oldest part of the Heroes' Guild. The Chamber itself is a massive circular room. The centre of the room is slightly elevated, with steps leading up to it. It makes appearances in Fable, Fable: The Lost Chapters, Fable Anniversary and Fable II.

"The place where the past meets the future."

— Map DescriptionIn the first Fable, the Chamber of Fate serves a number of purposes. We first see it when the Hero of Oakvale finishes his Guild Training and receives his Guild Seal, along with Whisper. As you progress through the game you will see frescoes of your important accomplishments on the walls of the Chamber of Fate. From there, the Chamber is unused until the Battle Jack of Blades quest, where the Hero battles Jack of Blades in his human form. After Jack is defeated, a swirling vortex appears at the highest elevation of the floor. The Hero has a choice as to whether to cast The Sword of Aeons into the vortex or kill his sister Theresa with the sword. 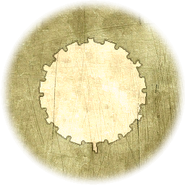 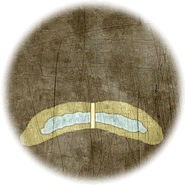 In Fable II, the Chamber of Fate lies in the depths of the Old Tomb in the middle of Bower Lake. It is but a ghost of its former self with much of the floor missing and the walls crumbling down due to the centuries that had passed. It can be reached by traversing the Guild Cave from the entrance to the Old Tomb. The paintings along the wall tell the tale of the Hero of Oakvale. When the Hero of Bowerstone first encounters it, Theresa shows them how to use their Will powers. Many other quests require the Hero to come back here in order to meet the other Heroes in their quest to fight Lucien Fairfax.

The frescoes on the wall in Fable II indicate that the Hero of Oakvale was morally Good rather than morally Evil Hero.

This helps support the theory that the book entitled "The Hero of Oakvale" is inaccurate as it states he carried the Sword of Aeons, but a good hero would not kill family for a sword. This may be inaccurate because the Sword of Aeons and the Avo's Tear looks almost the same apart for the colour. Or the Hero took the sword from Jack, killed him with it, and then threw it into the vortex, it can also be that the book was historically incorrect as stated by an Albion citizen in a Fable II loading screen that the scholars make stuff up most of the time.

Another of the images on the walls shows Jack's manipulation of the events of Fable, however, in the original game the Hero's mother was on the right and Theresa was on the left. During Fable II, they have been switched. The image of the village burning had also evidently been inverted but without the child Hero standing in the middle.

The Chamber of Fate is also where the Hero of Southcliff kept his treasure, depending on his choice after the Duke of Southcliff is overthrown. The Hero of Bowerstone can later claim it as their own.

The Raid on Oakvale