Celeste is one of the playable Heroes in Fable Legends.

Celeste is part of a community of stargazers, the People of the Great Question. Commanding and statuesque she towers over anyone foolish enough to face her, both physically and intellectually. A mighty friend and an even mightier foe, she was brought up to believe that the heavens hold the secrets to life's mysteries and has spent her time observing the movements of the stars. She has also learned her people's power to control light with her mind, channelling it into both a healing and deadly force.

Her people's search for the answer to the great question sent Celeste far from home. And so it is, she has now found herself out in the field, learning first hand of Albion and her ‘interesting’ inhabitants. Needless to say Celeste’s early encounters with Albion’s general population came as a bit of a shock. Most farmers, villagers and townsfolk didn’t seem to care about knowledge other than how it related to food, money, and other more primal needs. Just as Celeste was beginning to despair of ever finding meaning in the pubs and villages of Albion, she encountered a bard with an extremely interesting tale to tell. For coin and an attentive ear, he wove yarns of Heroes and how they were returning to the land, gathering in an emerging centre of culture and commerce. He called this modern marvel Brightlodge and Celeste thought it sounded fascinating. Eager though she was, logic dictated she look to the stars to see if this was the path they illuminated. They answered with an ox cart and weary Brightlodge farmer, willing to offer her a ride to the outskirts of town. 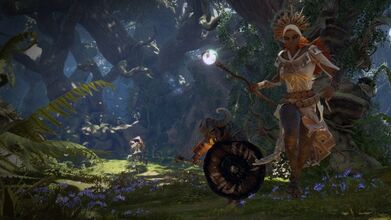 Retrieved from "https://fable.fandom.com/wiki/Celeste?oldid=148587"
Community content is available under CC-BY-SA unless otherwise noted.