Captain Saker, or just Saker, is a character featured in Fable III and is the leader of a group of mercenaries who inhabit a camp near Brightwall located in Mistpeak. Sir Walter also mentions that Saker was a member of the army, but had more in common with bandits and cutthroats.

The Hero of Brightwall must disguise as a mercenary to gain entrance to the Mercenary camp, and also purchase a beard and tattoos to appear more convincing. Once inside the base, the Hero must find Captain Saker and fight him. He surrenders, and the player is given the choice of killing him or allowing him to live.

If the player decides to spare him, the Hero slaps Saker's face and then proceeds to help him stand up. He will then pledge his support and men to the revolution against Logan. Choosing this option will add Saker to the manifestations of your allies along the Road to Rule and the Mercenary Camp becomes a functional settlement, remaining populated, and allows players to purchase property and utilize services such as shops and prostitutes. Although he is accepted as a member of your rebellion, neither he nor any of his mercenaries will be present at the battle against Logan's forces. 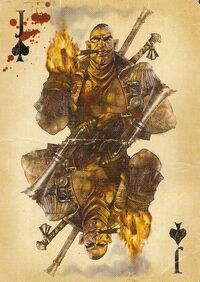 If the player decides to kill him, a short cut-scene of Saker attacking the Hero, only to be brought to the ground and executed, will be shown. Choosing this option voids all life within the camp, makes all property unusable, and does not add Saker to the Road to Rule. The camp will repopulate upon downloading Understone, but the buildings will still not be purchasable.

However you choose to end this conflict, the Dwellers' land will be returned to them.

He is the first of many enemies similar in appearance to himself, like the Commandant in Fable II. Each of these mobs will look similar to Saker, cigar and all, but with different colouration on their clothing. They will also share all the same abilities as him, as well as the power to cast spells, though they have nowhere near as much health as Saker. Saker is also incredibly strong, being able to use a "Ground-pound" like ability to knock the Hero back. It is unknown if he and the other huge mercenaries are in fact a weaker form of Heroes, or if these abilities were simply added to make the fight more interesting for players.

An early screenshot of Saker

Saker's portrait.
Add a photo to this gallery
Retrieved from "https://fable.fandom.com/wiki/Captain_Saker?oldid=143520"
Community content is available under CC-BY-SA unless otherwise noted.