Bowerstone Quay is the harbour of Bowerstone in Fable, Fable: The Lost Chapters, and Fable Anniversary. Its use is ambiguous as there are no fishing boats, despite the map description stating that it 'relies on trade with Oakvale.' It is possible the quay has trade links with places in inner Albion such as Greatwood and Orchard Farm, but the bridges along the rivers make this unlikely. The Quay is also the place where the local Fist Fighters gang conducts their meetings. A witch who makes potions also lives in a hut there (Fable: TLC and Anniversary only). There is also a Hut that you can use at any time.

Bowerstone's thriving economy relies on trade with Oakvale. Ships laden with weapons, potions, clothing and grain sail into the port several times a week, allowing traders to replenish their stocks. The area also has a reputation for rather more clandestine activities during the night... 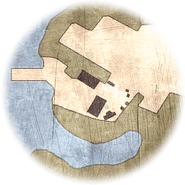