Bowerstone Jail is a region in Fable, Fable: The Lost Chapters, and Fable Anniversary that lies between Bowerstone North and Windmill Hill. There is only one cell in this area, which is to the right of the exit from Bowerstone North. The quest Rescue the Archaeologist begins in this region, and Thunder can be found here during Mayor's Invitation.

The jail north of Bowerstone is said to be the stepping stone to an early grave. 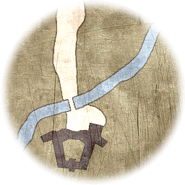 Minimap
Add a photo to this gallery

Retrieved from "https://fable.fandom.com/wiki/Bowerstone_Jail?oldid=147590"
Community content is available under CC-BY-SA unless otherwise noted.