Bowerstone Castle, or Castle Fairfax as it was known in Fable II, returns in Fable III. It serves as the residence of the monarchy, having been the home of Lucien Fairfax, the Hero of Bowerstone, and eventually his/her children: Logan and the Hero of Brightwall. It has been greatly expanded over the 50 years between Fable II and Fable III. The previous looks of the castle are almost entirely gone, albeit for the tower, though it is inaccessible. You receive the castle after you become the King or Queen.

Bowerstone Castle is reached through Bowerstone Market. Having walked up the stairs and entered the castle itself, you find yourself in the main hall. In front of you is a staircase, to your left the dining room and to your right, a combat practice room. At the top of these stairs you can go three ways, to the left into the Royal suite, to the right into the War Room and the Treasury, or straight ahead into the Throne room. From the dining room one can go to the kitchen or even to the Library. From there you can enter the garden with the Hero of Bowerstone's tomb. Go upstairs via the garden stairs and you find yourself in the Prince's/Princess's room, a room separate from the others.

The War Room features several times in Fable III. It is seen during Life in the Castle when Sir Walter Beck meets up with King Logan to discuss the protestors outside the castle. It is here, that Sir Walter is assaulted by Logan's guards and is where said King issues an ultimatum to the Hero of Brightwall.

The Castle Treasury, sometimes referred to as the Royal Treasury, is a room in Bowerstone Castle where Albion's royal funds are stored. The Royal funds are used for a variety of reasons, mainly in benefiting the kingdom, maintaining the upkeep of the Albion Royal Army and for tax reasons.

The Castle Treasury is used on multiple occassions by the Hero of Brightwall after the Coronation, and during the quest The Weight of the World, in order to store and collate the funds needed to maintain the upkeep of the army and aid in funds for recruitment. But this money can also be used in order to benefit or to the detriment of the kingdom, such as building a school in Bowerstone Industrial or reinstating child labour; setting tax rates; restoring child benfits or introducing fines; removing the drink limit, banning alcohol or keeping the drink limit; raising or lowering the guard budget or keeping it neutral; rebuilding or leaving Bowerstone Old Quarter; renovating Bowerstone Shelter or turning it into a brothel; building a Sewage Plant in Bowerstone Industrial or dumping it in Mourningwood; protecting Bower Lake or draining it and subsequently mining it; bailing out the economy or letting it collapse; building a desert outpost in Shifting Sands or rejecting the proposal, amongst fulfilling or breaking the promises made when the Hero was gathering allies for the quest The Battle for Albion. All of these factors will either diminish the royal funds, increase it or will make no change to the amount of funds in the Treasury. Refilling the treasury after the crawler attack will cause any citizens that you lost in the battle to start returning.

In the library where you can find the sixth page of Ben Finn's book, there are four statues that can be interacted with. If you interact with them in the right order, the locked door will open up to a set of stairs that lead down to a chest. The order to interact with the statues is as follows (their positions are explained as if you've entered from the garden): far left (Hero of Skill), far right (Hero of Strength), near left (Hero of Will) and near right (conclusion). The text that appears when you "read" the four statues is about the ancient Heroes that were mentioned in the novel "Fable: The Balverine Order".

There were once three great Heroes known as the Triumvirate, each the master of his discipline, who lived and died in distant lands to the east of Albion. First was the Hero of Skill, whose marksmanship with pistols remains unsurpassed (though the man called Reaver claims otherwise).

The second was the Hero of Strength, a huge man whose equally hefty sword could cleave armies with a single swing.

The third was perhaps the most powerful of all: the Hero of Will, who commanded the elements into such powerful spells, the world has never seen the like again. Together they formed an invincible force, which could be ended only by death.

But before they died, it is said they created three talismans imbued with their powers: a pistol, a sword, and a gauntlet. According to legend, should three individuals find these talismans, and be found worthy of using them, they will become as powerful as the Triumvirate. For a time at least...

Shot in the Head[]

In the hallway with the two deer heads, between the library and the entrance hall, you will find a note that says: "First rule of becoming a trophy: don't get shot in the head." This refers to the two deer heads on the wall; there is an invisible flit switch you can shoot. Shoot in between the antlers of the deer next to the ladder and you should hit it. Once you hit it, it will move to the other deer. Shoot in between the other deer's antlers and once you hit it again, a bookcase will slide back to reveal a small room with a chest in it.

Pre-release shot of the Hero in Bowerstone Castle.

Bowerstone Castle as seen in the Chicken trailer. 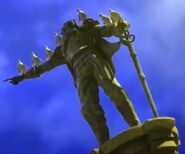 The Hero stands beside the throne.